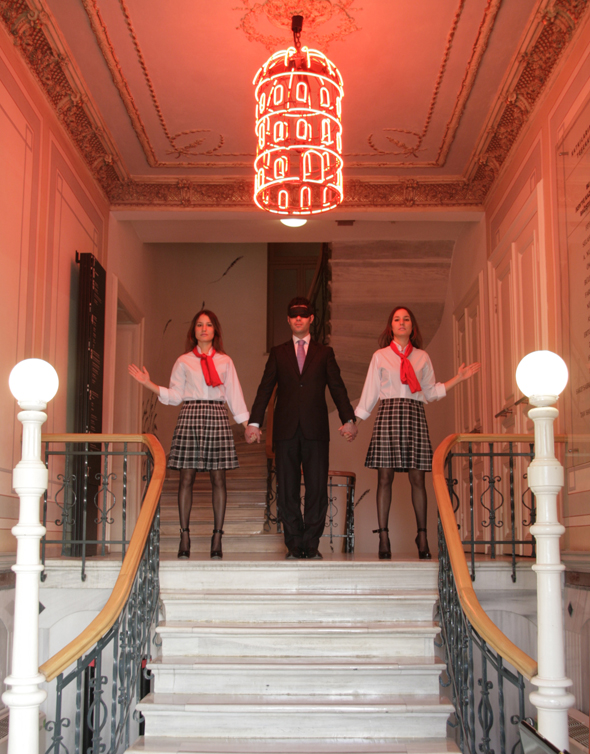 You will be the Only one in the ‘Saloon’
Ottoman Sultans in 19th century used to watch plays in their palace theaters alone. Today, art has opened to the public, but the mass mediafication led to the erosion of many details. In Genco Gülan’s project “twin”, you will be the only audience just like the Kings, with a minor difference: You will be blindfolded…
Gülan’s “twin” project questionizes the concepts of viewing, viewer, and to be viewed through the participation. At the performance a pair of twins will invite you to participate the game one by one. They will blindfold you, hold your hands they lead you to Salon. The route which the participants will not see till the end, is full of little surprises… Even though the tales will sound familiar in the first sight; the little trip will be threatening as well as pleasing.
Conceptual artist Genco Gülan’s performance project, parallel to many of his other works, is built on the concepts of  uniqueness and multiplication. The symmetry and asymmetry in the foundation of art and aesthetics are also his area of interest. The site-specific journey that identical twins are going to take you, only for the 22 people, will be a unique experience decorated with details from art history.
The performance that Gülan prepares is radically different from the classic formats such as “İtalian stage” and “white cube”. The interdisciplinary piece brings the classical Saloon exhibition concept to an entirely new level. It articulates that communication in art may still be possible. Furthermore “twin” offers new gates to phenomenon of ‘perfection’ by doubling the dosage. While referring to the digital and bio technologies on the conceptual framework, the project bases the structure on the human to human relations and imagination. The “twin”, which will be held every second day of each week, in the second month of 2011, will promise a unique experience by addressing five minus one of our senses.

Genco Gülan is a conceptual artist with an interest in new media and performance art. He studied Political Science and Art at Bogazici University then he pursued an MA degree on Media Studies at New School, New York. He got prizes from BP, New School, Lions, E.M.A.F. Nominated for the European Art prize in 2012 and got selected as a finalist. Gülan made solo shows in Istanbul, Ankara, Graz, Berlin, New York, Seoul and Zagreb. His works are presented in museums such as; Centre Pompidou, Pera, ZKM, MAM, Rio and La Triennale di Milano. He participated to festivals such as; Steirishes Herbst, Ars Electronica, Mediaterra, prog-me, Accente, Balkan Art and Istanbul Festival. His net-art pieces have been exhibited at irishmuseumofmodernart.org, rhizome.org and kanonmedia.com/ His works listed in required reading lists such as; City University, New York, Rice University and U.C. Santa Barbara. Gülan gave conferences at Yale, School of Visual Arts, Köln University and New York Institute of Technology. Genco Gülan and his art has been referred to by Newsweek, Herald Tribune, NY Arts, Art in America, Art News, Das Kunst, Beaux Arts and Idomenee. His monography edited Dr. Marcus Graf is published by Revolver Berlin the title "Conceptual Colors of genco Gulan". His book "De-Constructing the Digital Revolution" is published by LAP and both of the books are available at amazon.com/ Genco Gülan was in the Advisory Board of Balkan Biennial, Thessaloniki and International Programming Committee of ISEA Singapore. He is the founder of the Web Biennial. Currently he teaches at Mimar Sinan Academy and Bogazici University.
More from Genco Gulan:
Reply to this Announcement
You must be logged in to post a comment. Log In
Advertise on Rhizome with Nectar Ads
Active Discussions
Fuori Dalla Cerchia (0 posts)
Last comment 4 years, 11 months ago by
Yamil Orlando
Interspherence Patterns (1 post)
Last comment 4 years, 11 months ago by
Edwin VanGorder
Collective W.S.G. (Weird Shape Generator) (0 posts)
Last comment 4 years, 11 months ago by
Jazzmike
Autumn Offerings : Trace and Rhizome (1 post)
Last comment 4 years, 11 months ago by
Edwin VanGorder
Plantoid: the blockchain-based art that makes itself (1 post)
Last comment 4 years, 11 months ago by
marc garrett
Community Deadlines
Dec
31
Thu
Call for Participation:
invitation to contribute a short text on art education
Posted by Michael Szpakowski