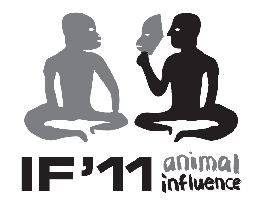 Interactive Futures (IF) 2011, November 17-19, presents the theme “Animal Influence” by spotlighting the work of media artists whose work has been influenced by the growing wealth of knowledge on animal behavior, cognition, creativity and consciousness emerging from such fields as ecology, cognitive ethology, psychology, neuroscience, cognitive science, philosophy, zoology, and others. These research areas have focused on new understandings of animal life and are helping to shift assumed conventions concerning animal cognition, consciousness, and agency. While the change in human attitudes towards animals has been documented in news media as well as in more academic venues, the idea that animals might possess emotional, moral, cognitive lives is an idea that has been, in the past, either dismissed or associated with metaphorical or symbolic approaches.

Our particular interest is in how investigations in animal-human relations are affecting the ways in which new media artists are considering broader understandings of other species and creating varying methodologies for experimental art and new media appropriate for these unique circumstances.

IF’11: Animal Influence offers a workshop, exhibitions, performances, screenings and international promotional activity and an international publication with the journal Antennae: Journal of Nature in Visual Culture for audiences including policy-makers, business leaders, community leaders, educators, and members of the media, as well as academics and artists in various fields and interested members of the public.

Leila Nadir is Mellon Post-Doctoral Fellow in Environmental Humanities at Wellesley College and earned her Ph.D. in English from Columbia University in 2009. She works as a trans-disciplinary scholar, new media artist, and creative writer, traversing the fields of trans-American literature, critical/cultural theory, theories of modernity/modernism, and media studies. Since 2005, she has been collaborating with artist Cary Peppermint under the name ecoarttech: together Cary and Leila explore the convergence of biological, cultural, and digital networks, imagining what it means to be an ecological being amidst globally networked environments. In spring 2012, Furtherfield interviewed Cary and Leila about the relationships of environment, media, technology in their work: http://www.furtherfield.org/features/interviews/interview-leila-nadir-and-cary-peppermint-ecoarttech. Recent works include “Indeterminate Hikes” (2011/2012), a smartphone app and installation that transforms chance encounters in everyday locales into public performances of bio-cultural diversity and wild happenings, created originally for the Whitney Museum of American Art ISP exhibition; “Untitled Landscape #5,” an internet-based work commissioned by the Whitney Museum of American Art, which visualizes the digital footprint left by visitors to the Museum’s online information environment; “Center for Wildness in the Everyday” (2010), a series of networked performances about the “wildness” of water in the Texas Trinity River Basin, commissioned by the University of North Texas College of Visual Arts and Design; and “Eclipse” (2009), a net art work exploring the politics of pollution, the myth of wilderness, and the surplus of online information, commissioned by Turbulence.org of New Radio & Performing Arts, Inc. other honors include a New York Foundation for the Arts artist fellowship and teaching positions at Banff New Media Institute and Anderson Arts Ranch. In addition to ecoarttech, Leila regularly reviews exhibitions and books related to art, technology, environment, and science. Many of her reviews can be found at Hyperallergic: http://hyperallergic.com/author/leila-nadir/. Her current projects also include writing a memoir about growing up in an Afghan immigrant community in rural Central New York during the Cold War and revising her doctoral dissertation into a book intertwining ecological theories of modernity, media, art, and literature. For more information, please visit http://www.ecoarttech.net/. You can also follow Leila's work with and beyond ecoarttech by joining https://www.facebook.com/ecoarttech or following ecoarttech's Twitter feed at http://twitter.com/#!/ecoarttech.
Reply to this Announcement
You must be logged in to post a comment. Log In
Advertise on Rhizome with Nectar Ads
Active Discussions
Fuori Dalla Cerchia (0 posts)
Last comment 4 years, 5 months ago by
Yamil Orlando
Interspherence Patterns (1 post)
Last comment 4 years, 5 months ago by
Edwin VanGorder
Collective W.S.G. (Weird Shape Generator) (0 posts)
Last comment 4 years, 5 months ago by
Jazzmike
Autumn Offerings : Trace and Rhizome (1 post)
Last comment 4 years, 5 months ago by
Edwin VanGorder
Plantoid: the blockchain-based art that makes itself (1 post)
Last comment 4 years, 5 months ago by
marc garrett
Community Deadlines
Dec
31
Thu
Call for Participation:
invitation to contribute a short text on art education
Posted by Michael Szpakowski