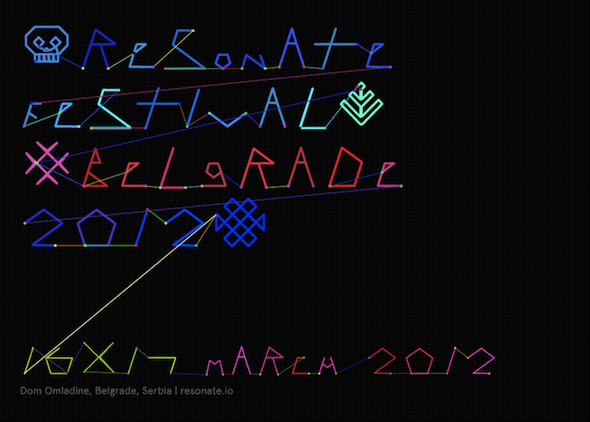 Resonate is a new platform for networking, information, knowledge sharing and education. It will bring together distinguished, world class artists, with an opportunity of participating in a forward-looking debate on the position of technology in art and culture.

Resonate is more than just a festival, expert seminar or exhibition of visual arts. It is broad enough to encompass areas ranging from software engineering to visual arts theory, but also to create a bridge between culturally separated segments of the artistic and intellectual scene through a comprehensive, multidisciplinary approach.

Where:
Belgrade is the capital and largest city of Serbia and the birthplace of the largest prehistoric culture of Europe. It has an urban population of 1.7 million people, making it one of the largest cities of Southeastern Europe. “Belgrade Opens Up With Amps On” - NYTimes

Dom Omladine (DOB), located in the centre of Belgrade, is a center that promotes programs for youth in the sphere of contemporary art and culture. In its range of activities, it covers all art disciplines and forms: from visual arts and new media, to film, theatre and music. Educational debate programs have an equally significant role and have been a trademark of DOB for decades . DOB has gained a cult status as a gathering place for young people of Belgrade. Covering a total of over 5,000 square meters, DOB accommodates over 2,000 visitors.

‘Resonate’ is an initiative by “Magnetic Field B” in collaboration with CreativeApplications.Net and Dom Omladine, Belgrade. The event takes place in Belgrade, Serbia, March 16-17 in 2012.