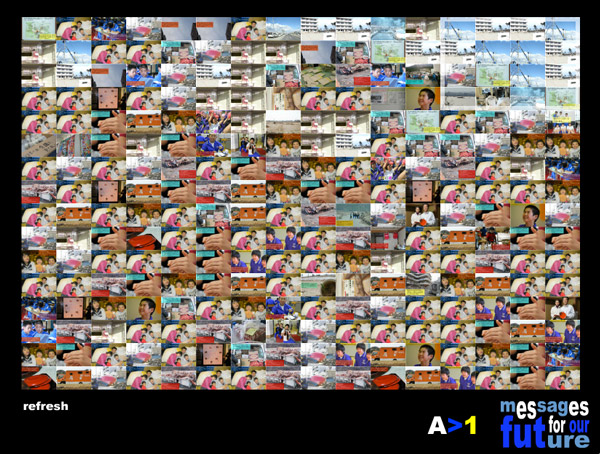 It’s been year since a tsunami devastated the northeast coast of Japan. And to honor those who are bravely rebuilding their communities, I’ve recently collaborated with a group of students and residents from Tohoku, Japan to create an interactive artwork. Armed with donated cameras, they took hundreds of photos of both the disaster’s aftermath and, more importantly, their hopeful recovery. They then responded to these visions with poetic message. Digital poet Jason Nelson, then compiled these photographs and texts and using an infinitely recombining/zooming engine, created interactive mosaic digital artwork.

T: Messages for our Future
U: http://www.secrettechnology.com/japan/

Please do spread anywhere and everywhere.

And screenshots should you want: http://www.secrettechnology.com/japan/screens/

Link:
http://www.secrettechnology.com/japan/
Without really predicting the future, I've discovered a few places where quality goods can be purchased. I'm also from Oklahoma, but sadly don't live there now. Being a poet by training, I love the way lights flicker and sounds make my stomach all a flutter. Jason is scared of being hidden. But then so are the digital bits he farms. Certain regulations require his standing, and then sitting, which is just too damn obvious. Sometimes he teaches at Griffith University (on the coast’s most golden of coasts) as a lecturer in Cyberstudies, although the term conjures robots with beaks and hard wired…somethings. If you like this, you love this: www.heliozoa.com. Sometimes, after nights of talking with friends late into the night, you come home at three or four in the morning and stumble into the bathroom. After a long release of fluids, and the sound of a night’s hard work being flushed away, you look in the mirror. At first the disheveled interloper in the metal backed glass is someone you don’t know. You douse your face with water and lookup again. Still the head and nose and eyes appear strange wobbling back at you with their curious stare. You strain to recognize the person. You clean the glass with a mildewing towel from the floor and still struggle to befriend this other invading your space. Perhaps that is the way I feel as a hypermedia poet. After the intoxicating experience of creating hypermedia works, I am bewildered by my artistic reflection. Am I, as some ask, a painter? A poet? A sound manipulator? A multimedia tinkerer? I suppose some would say I am all of these. And others would say none. The work presented here for the Ohio Arts grant represents my pulling together art forms, my collage of poetry, image, sound, movement, and interaction. All of these elements are then filtered through the web environment, allowing for a broad audience, a hypermedia gallery for every computer. But all of this, all the merging of various genres and technology is still too new, too ever evolving for anybody to know in any coherently explainable way what exactly they are doing. And that is exactly why hypermedia is so beautiful and enticing. Sometime, long ago, someone began classifying and categorizing our world. You are a baker, you are a criminal and you over there are a Central American poet revealing the class struggle. While some say postmodernism is mired in it’s own labeling of anti-labeling paradox, it has, at least, provided a generous platform for the creation of hypermedia works. The previous ideas of what goes where, of what poetic technique is helpful for recreating the pains and joys of life, seem silly in a hypermedia environment. An environment where technology allows the artist to cross boundaries and create new borders. Creativity is dental floss is mouse movement. When I painfully shave the coarse hairs from my face, and cleaning the cream from my face look into the mirror, I don’t see an artist I can place in a recognizable category. All I see are the crooked lines between my eyebrows and the towel rack behind me. I see a poem forming in the exhaust fans loud and louder buzz. The condensation over words carrying the light from a seventy-five watt bulb to patterns on the floor.
More from Jason Nelson:
Reply to this Announcement
You must be logged in to post a comment. Log In
Advertise on Rhizome with Nectar Ads
Active Discussions
Fuori Dalla Cerchia (0 posts)
Last comment 4 years, 9 months ago by
Yamil Orlando
Interspherence Patterns (1 post)
Last comment 4 years, 9 months ago by
Edwin VanGorder
Collective W.S.G. (Weird Shape Generator) (0 posts)
Last comment 4 years, 9 months ago by
Jazzmike
Autumn Offerings : Trace and Rhizome (1 post)
Last comment 4 years, 9 months ago by
Edwin VanGorder
Plantoid: the blockchain-based art that makes itself (1 post)
Last comment 4 years, 9 months ago by
marc garrett
Community Deadlines
Dec
31
Thu
Call for Participation:
invitation to contribute a short text on art education
Posted by Michael Szpakowski