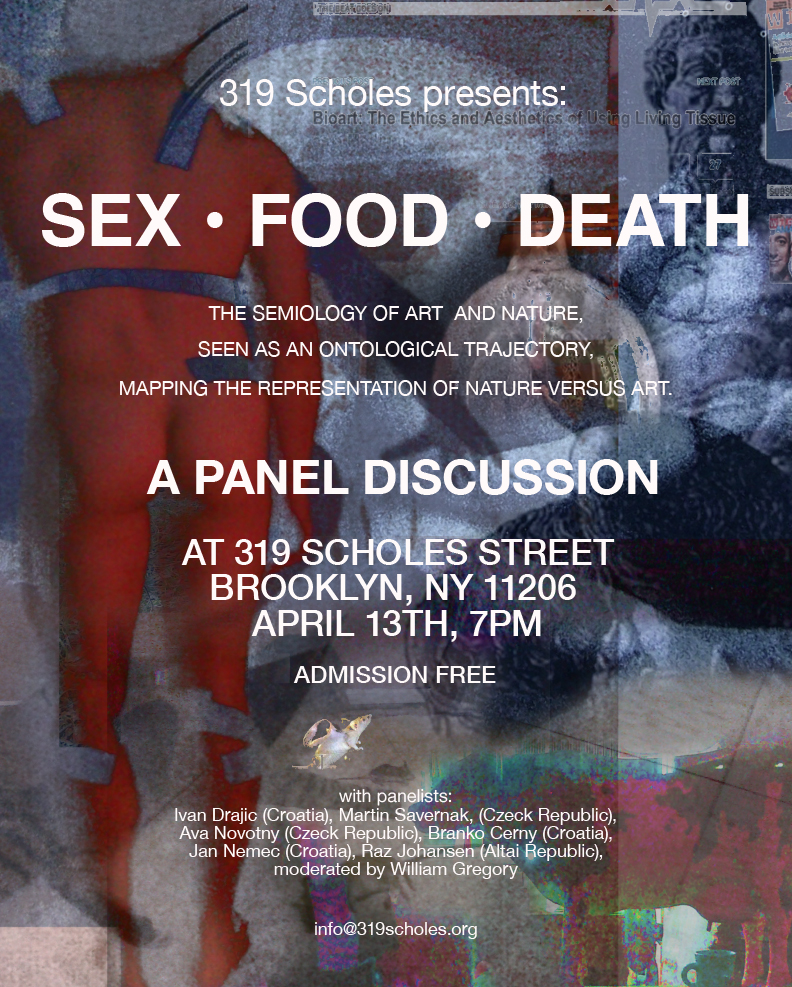 SexFoodDeath
The Semiology of Art Against Nature, seen as an Ontological Trajectory, Mapping the Representation of Nature versus Art.

Sex-Food-Death is a panel discussion organized by 319 Scholes and Artists Meeting, a New York City based collective. The Panel will explore a range of creative tendencies that presage the coming integration of biology, science, art, research, and post-human critique.

A multidisciplinary team of panelists from the L’Institut d’Arts Invasifs, working in conjunction with researchers from University of Life Sciences and the Institute for Molecular Life Sciences, will discuss their controversial research on Biostallations, an emerging creative practice situated in active theaters of war. This work has been quietly generating controversy among European bio-ethicists and religious leaders, due to its use of human subjects, genetic interventions, drone technology, and bizarre academic ritual celebrations. While the group of artists undertaking this work chooses to remain underground, their institutional research partners have agreed to speak out for the first time, amid accusations of European-wide censorship and a media blackout.

Sex-Food-Death will illuminate new and potentially groundbreaking creative practices, while proposing techniques for collapsing the boundaries between contemporary theories of bio-art and art, art and nature, nature and bio-art. These multiparous fields of generative practice existing within both microscopic and socio-cultural domains will soon have a disrupting effect on cultural production as we have come to understand it.

“Simultaneously, the so-called ethical constraints of Western Civilization collapse around the reality of the flexible genome. The tools of war unleashed by the scientific community are affording us with a tremendous opportunity to map the exigent patterns of the bio-chemical experience of fear, and to develop protocols, heuristics, and experimental trials, which heighten, modify and rework an individual’s range of experience.”

“As World Society produces ever more regenerative social features, and as its formerly static definitions and self-descriptions clash with their own circular perceptions of their continued existence—contemporary artists must either adapt to this new paradigm, or prepare for extinction. It is only through the continual creation of self-producing/other-producing virtual organisms—that art can survive the coming singularity. Biostallations are but the opening move in this unfolding post-information domain.”

”The object is over, dead, finished. The virtual is soon to follow.”
Dr. Novotny, addressing a recent gathering of paleo-capitalists at the FLINS conference, Brugge, EU.

A visual art exhibition and will accompany the panel discussion.

319 Scholes supports digital arts and experimentation through exhibitions, lectures, panels, participatory workshops, and live performances. We use a non-disciplinary approach to examine technology and its effects on our communities, relationships, and the body. Grounded in the belief that art is the best way to navigate the potential of networked culture, we aim to cultivate challenging and experiential modes of engaging with new media. Established in 2009, 319 Scholes is run by artists and a core group of collaborators, operating out of a renovated warehouse in Bushwick, Brooklyn.
http://319scholes.org

G. H. Hovagimyan is an experimental cross media, new media and performance artist who lives and works in New York City. He was born 1950 in Plymouth, Massachusetts. In 1972, He received a B.F.A from the University of the Arts in Philadelphia, Pennsylvania and received an MA from New York University in 2005. He is a professor at the School of Visual Arts in the MFA Computer Arts Department. He was one of the first artist's in New York to start working in Internet Art in 1993 with such artist's online groups as, the thing, ArtNetWeb, and Rhizome. He has collaborated with English/French sound artist Peter Sinclair (sound artist) on a number of works. <br> From 1973 to 1986 he was involved in the SoHo and Lower East Side underground art scene. He exhibited a rigorously conceptual art show at 112 Workshop in 1973. He was a friend of the artist Gordon Matta-Clark who was also involved in 112 Workshop. He worked with Matta-Clark on several projects namely; Days’ End, Conical Intersect, Walking Man’s Arch, and Underground Explorations. In 1974 during the video-performance series at 112 Greene Street, he performed opposite Spaulding Gray in Richard Serra's video, A Prisoner's Dilemma.<br> Much of his early work was ephemeral in nature. It involved performance art, written and language works and temporary installations in galleries. A word piece, Tactics for Survival in the New Culture, was exhibited in "The Manifesto Show" (1979) organized by the artist collective colab. This particular piece was to become the basis for one of his first online hypertext works in 1993. He showed in several group exhibitions organized by Jean Dupuy, a French Fluxus artist living in New York at 405 E. 13th Street. In 1980 he did a series of punk performance pieces for Artist's Space series called Open Mic. One piece, Rich Sucker Rap was recorded by Davidson Gigliotti for a video tape called Chant Accapella which Electronic Arts Intermix carries in its catalog. He also performed in several No Wave Cinema films among them, The Offenders(1980) by Scott B & Beth B and The Deadly Art of Survival by Charles Ahearn. In the early 1990’s he started working in Media Art and New Media Art. Some of the pieces involve using a combination of photographs and text, often mimicking advertising. In May, 1994 his twenty billboard project for Creative Time, Hey Bozo… Use Mass Transit, received quite a bit of press. The work was seen on several newscasts such as Good Day New York, and the NBC Nightly News (nationally). It was written up in the NY Post, NY Daily News, The New York Times, etc. A telephone interview with the artist and a report on the project was distributed over the AP newswire. Around the same time he began working with computers and the internet. One of the earliest internet artists, his first pieces, BKPC, Art Direct and, Faux Conceptual Art, were written about in the art magazines Art in America ( Robert Atkins, 1995 Art in America, December, “Art On Line” pp.63) and Art Press (Special Issue, Techno: Anatomy of electronic culture, 1998) France. He also hosted an internet radio/TV talk show called Art Dirt. The first of it's kind, Art Dirt, is part of the Walker Art Center's Digital Studies Archives collection. Of his collaborative works with Peter Sinclair, the most well known are a Soapopera for Laptops/ iMacs, Shooter and Rant/ Rant Back/ Back Rant. Shooter, an immersive sound and laser installation was developed at Eyebeam Atelier as part of its’ Artist in Residence program.
More from G.H. Hovagimyan:
Reply to this Announcement
You must be logged in to post a comment. Log In
Advertise on Rhizome with Nectar Ads
Active Discussions
Fuori Dalla Cerchia (0 posts)
Last comment 4 years, 9 months ago by
Yamil Orlando
Interspherence Patterns (1 post)
Last comment 4 years, 9 months ago by
Edwin VanGorder
Collective W.S.G. (Weird Shape Generator) (0 posts)
Last comment 4 years, 9 months ago by
Jazzmike
Autumn Offerings : Trace and Rhizome (1 post)
Last comment 4 years, 9 months ago by
Edwin VanGorder
Plantoid: the blockchain-based art that makes itself (1 post)
Last comment 4 years, 9 months ago by
marc garrett
Community Deadlines
Dec
31
Thu
Call for Participation:
invitation to contribute a short text on art education
Posted by Michael Szpakowski