Architecture and Computation with Keller Easterling and Erica Robles (Part of PROGRAM: Media and Literature at NYU) 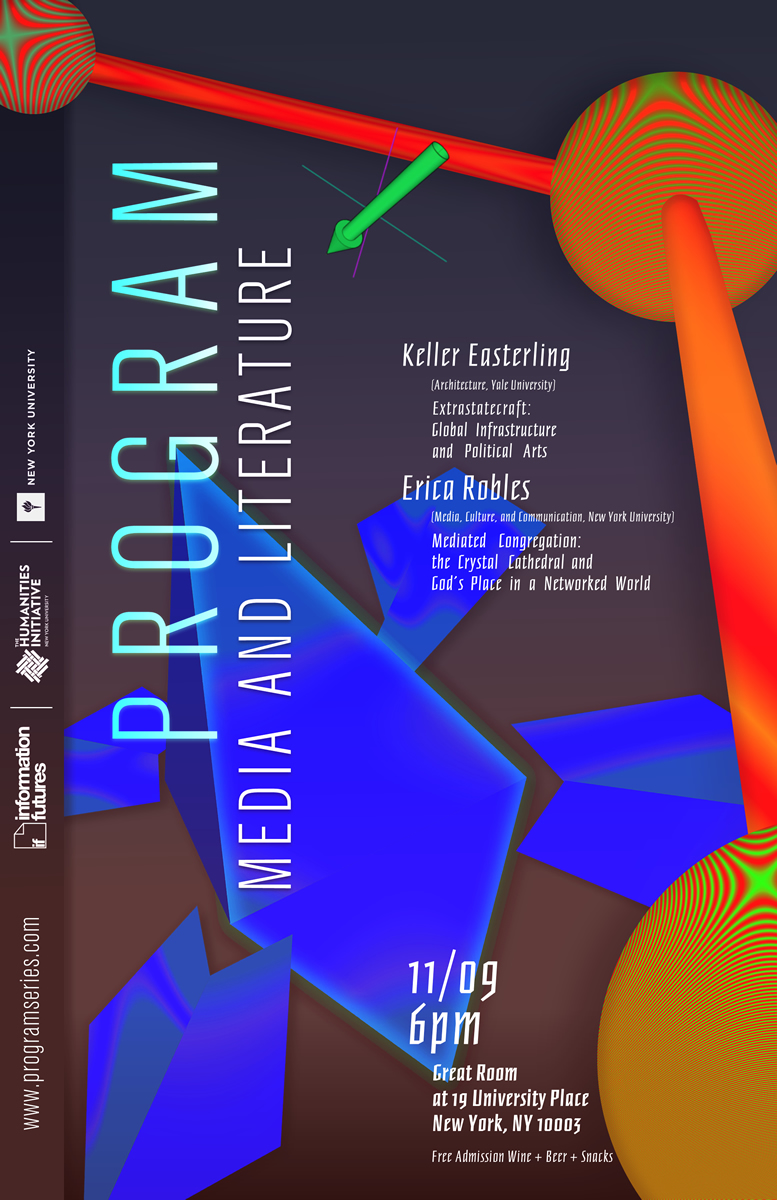 Join us on November 9th at 6PM for "Architecture and Computation" with speakers Keller Easterling (Architecture, Yale) and Erica Robles (MCC, NYU). This will be the first event in this year's PROGRAM: Media and Literature lecture series.

Free and Open to the Public

"PROGRAM" is an interdisciplinary event series organized by graduate students within New York University’s Media, Culture and Communication, English, and Comparative Literature Departments. Intentionally broad in scope, the series will present talks that explore the cultural, historical, aesthetic and political impact of software and programming logic.

This first event in our year-long lecture series explores the intersection of architecture and the logic of computation. How does computation structure our physical world, and in what ways has the function of computational media been applied to the spaces we inhabit?


Keller Easterling (Yale University, Architecture)
Extrastatecraft: Global Infrastructure and Political Arts
Repeatable formulas and spatial products make most of the space in the world. Now, not only buildings but also entire cities have become spatial products that typically reproduce free zone world cities like Shenzhen or Dubai. Space has become a mobile, monetized, almost infrastructural, technology, where infrastructure is not only the urban substructure, but also the urban structure itself. Some of the most radical changes to the globalizing world are being written, not in the language of law and diplomacy, but rather in the language of this matrix space. Massive global infrastructure systems, administered by mixtures of public and private cohorts and driven by profound irrationalities, generate de facto, undeclared forms of polity faster than any even quasi-official forms of governance can legislate them—a wilder mongrel than any storied Leviathan for which we have studied political response. Infrastructure space is one crucible within which multiple fields of analysis encounter ample complexity, and it tutors special approaches to both form making and political arts.

Keller Easterling is is an architect, urbanist, writer, and Professor of Architecture at Yale University. Her latest project is titled Extrastatecraft.

Erica Robles (New York University, MCC)
Mediated Congregation: The Crystal Cathedral and God’s Place in a Networked WorldThis talk focuses on an often-overlooked institution that has helped produce and legitimate transformations in 20th century social life: the church. Through an analysis of the Crystal Cathedral Robles situates Protestant spatial production within a broader project of cultural re-formation whereby collective life became conducted via increasingly mediated, mobile, and distributed arrangements. For more than half a century, this influential Southern California ministry helped reshape the style and material conditions for worship. At its height, the Crystal Cathedral was perhaps the most visible Protestant church in the world.

Robles will render three distinctive and successive portraits of the church as a drive-in theater (1955-1957), an indoor-outdoor/television church (1962-1970), and then a globally-broadcast, glass and steel cathedral (1980 – 2012). Each site was a re-imagining of the socio-technical conditions for communion. Together, these portraits will trace a trajectory from the post-war to the present whereby the church helped determine technological and architectural meanings. By designing for mediated congregation, ministries like the Crystal Cathedral inscribed the production of broadcast and then networked geographies with spiritual significance. In so doing, they also translated Christian cosmology into a new technological regime.

Erica Robles is an Assistant Professor of Media, Culture, and Communication at New York University.

The series is sponsored by NYU's Information Futures, the Humanities Initiative, and the Departments of Media Culture, and Communication, English, and Comparative Literature.

Ceci Moss is the Assistant Curator of Visual Arts at Yerba Buena Center for the Arts in San Francisco and an Adjunct Professor at San Francisco Art Institute. She is responsible for coordinating several exhibitions (both solo and group shows) each year, special projects, public art commissions, and public programs for YBCA. Highlights include solo exhibitions by Jacqueline Kiyomi Gordon, Lucy Raven, Nate Boyce, Shana Moulton, and Brenna Murphy, a large scale public art installation by Kota Ezawa in YBCA’s sculpture court, and YBCA’s signature triennial Bay Area Now 7 co-curated with Betti-Sue Hertz. She also co-curated with Astria Suparak the exhibit Alien She that examines the lasting influence of the punk feminist movement Riot Grrrl on contemporary artists, and toured to five venues nationwide. She has a MA and PhD in Comparative Literature from New York University, and a BA in History and Sociology from U.C. Berkeley. Her academic research addresses contemporary internet-based art practice and network culture. Her PhD dissertation "Expanded Internet Art and the Informational Milieu" examines the expansion of internet art beyond the screen in the 2000’s, especially towards sculpture and installation, as a product of what theorist Tiziana Terranova called an “informational milieu.” Combining art history and media theory through the analysis of case studies that range from internet art and social media in the 2000’s to Jean-François Lyotard’s groundbreaking new media exhibition at the Centre Pompidou in 1985 Les Immatériaux, her dissertation asks how the widespread technological capture of information affects cultural production, specifically contemporary art, and the kind of critical response it necessitates. Her writing has appeared in Rhizome, Art in America, ArtAsiaPacific, Artforum, The Wire, Performa Magazine, New Media & Society and various art catalogs. Prior to her position at YBCA, she was the Senior Editor of the art and technology non-profit arts organization Rhizome, Special Projects Coordinator for the New Museum/Rhizome and an Adjunct Instructor at New York University in the Department of Comparative Literature. From 2000-2014, she programmed a radio show dedicated to experimental music, Radio Heart, on the independent radio stations KALX, East Village Radio and Radio Valencia.
More from Ceci Moss:
Reply to this Announcement
You must be logged in to post a comment. Log In
Advertise on Rhizome with Nectar Ads
Active Discussions
Fuori Dalla Cerchia (0 posts)
Last comment 4 years, 3 months ago by
Yamil Orlando
Interspherence Patterns (1 post)
Last comment 4 years, 3 months ago by
Edwin VanGorder
Collective W.S.G. (Weird Shape Generator) (0 posts)
Last comment 4 years, 3 months ago by
Jazzmike
Autumn Offerings : Trace and Rhizome (1 post)
Last comment 4 years, 3 months ago by
Edwin VanGorder
Plantoid: the blockchain-based art that makes itself (1 post)
Last comment 4 years, 3 months ago by
marc garrett
Community Deadlines
Dec
31
Thu
Call for Participation:
invitation to contribute a short text on art education
Posted by Michael Szpakowski