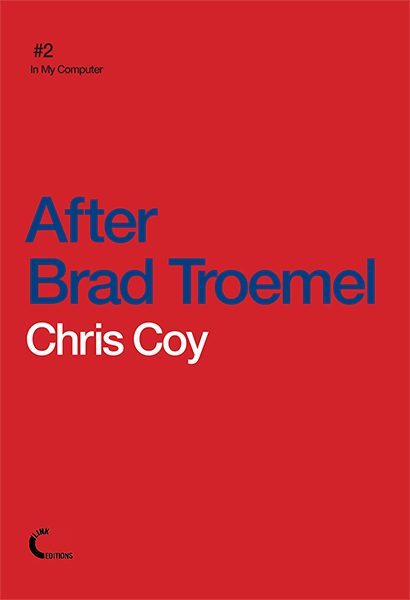 Link Editions is proud to announce the release of "After Brad Troemel", by US based artist Chris Coy. The book is the first of a selection made out of an open call for proposals, by a jury including Andreas Broeckmann, Ben Fino-Radin and Domenico Quaranta, to be released in our series "In My Computer" along 2013.

"After Brad Troemel" (ABT) is an artist book conceived for the JstChillin exhibition "Read/Write" at 319 Scholes in Brooklyn in 2011. The book - originally published in a limited edition of 20 - took as its conceptual core the characterization of artist Brad Troemel as a genius and a mastermind analyzed through the lens of conspiracy theory and amateur internet sleuthing. According to artist and writer Artie Vierkant, who wrote the introduction to this edition, ABT is not "about Brad Troemel, nor any of the myriad names or identities that are mentioned in its pages. ABT is about the construction of identity in a mediated public space - largely concerned with social interactions on the Internet, but most prominently through textual and visual communication. If it could be said to be about Brad Troemel, or even about Chris Coy himself, then these two are taken as case studies of two very divergent methods of approaching mediated identity."

The book, which disappeared from circulation soon after its first release, is now made available by Link Editions as a print-on-demand paperback through Lulu.com, and as a freely downloadable PDF available on Lulu.com, Issuu.com and on Link Editions' website.

Chris Coy (www.seecoy.com) is an artist and filmmaker currently living and working in Las Vegas. He has shown work at the New Museum in New York, the Sundance Film Festival, the Netherlands Media Art Institute and numerous international art festivals and group exhibitions.

In My Computer is a series of books collecting unpublished material available in your computer. The book can take any shape compatible with POD's production and distribution standards. A new call for proposals will be announced soon.
Link Editions (http://editions.linkartcenter.eu) is a publishing initiative of the Link Center for the Arts of the Information Age. Link Editions uses print on demand and digital formats to create an accessible, dynamic series of essays and pamphlets, but also artist books, catalogues and conference proceedings. A keen advocate of the idea that information wants to be free, Link Editions releases its contents free of charge in .pdf format, and on paper at a price accessible to all. Link Editions is a not-for-profit initiative and all its contents are circulated under an Attribution-NonCommercial-ShareAlike 3.0 Unported (CC BY-NC-SA 3.0) license.

Until June 15, all Link Editions books will be available onLulu.com with a 20% discount.