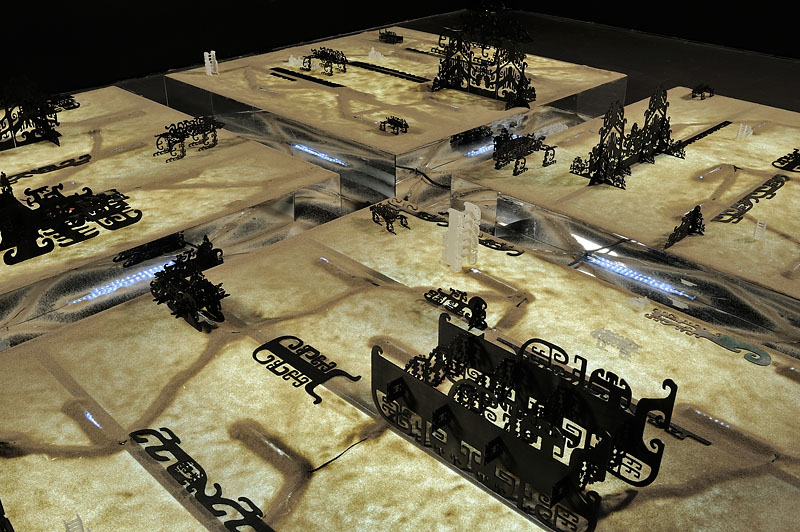 Working in sculpture, game design, installation, performance, sound and the internet, Portland-based artist Brenna Murphy is interested in digital technology’s capacity to connect and expand human consciousness. For Murphy, digital tools act as an electronic prosthesis that deepens awareness and cognition, rather than as an alien entity outside human experience. The labyrinth is an ongoing theme in Murphy’s practice. Her installations, websites, and virtual environments are set up as a series of interlocking spaces that encourage wandering, displacement and discovery. Like the naturally occurring geometric forms referenced in her work, they organically branch out from each other as a dense array of unfolding structures. The title for her exhibition at YBCA, Liquid Vehicle Transmitter, alludes to the fluid property found in much of Murphy’s output.

For her new installation, emergent entity chant array, Murphy has designed a type of fractal involving self-similar patterns at varying scales. Constructed out of a precisely configured assemblage of 3D printed sculptures, LED lights, light boxes, and wood cut forms, the installation resembles a real life version of her complex and dizzying internet-based works. Like Murphy’s virtual video game environments, emergent entity chant array plays upon the visitor’s perception of both space and dimension, encouraging the exploration of elevated states of consciousness.

Deeply post-humanist in her approach, Murphy views her creative process as a form of meditation in which she seeks an intuitive, harmonious relation with the tools used to produce her work. Her intricate arrangement of forms focuses her own energy and that of the viewer, drawing them in. This sense of an attuned connection with an audience is also an active element in the art collectives of which she is a member, MSHR and Oregon Painting Society.

Ceci Moss is the Assistant Curator of Visual Arts at Yerba Buena Center for the Arts in San Francisco and an Adjunct Professor at San Francisco Art Institute. She is responsible for coordinating several exhibitions (both solo and group shows) each year, special projects, public art commissions, and public programs for YBCA. Highlights include solo exhibitions by Jacqueline Kiyomi Gordon, Lucy Raven, Nate Boyce, Shana Moulton, and Brenna Murphy, a large scale public art installation by Kota Ezawa in YBCA’s sculpture court, and YBCA’s signature triennial Bay Area Now 7 co-curated with Betti-Sue Hertz. She also co-curated with Astria Suparak the exhibit Alien She that examines the lasting influence of the punk feminist movement Riot Grrrl on contemporary artists, and toured to five venues nationwide. She has a MA and PhD in Comparative Literature from New York University, and a BA in History and Sociology from U.C. Berkeley. Her academic research addresses contemporary internet-based art practice and network culture. Her PhD dissertation "Expanded Internet Art and the Informational Milieu" examines the expansion of internet art beyond the screen in the 2000’s, especially towards sculpture and installation, as a product of what theorist Tiziana Terranova called an “informational milieu.” Combining art history and media theory through the analysis of case studies that range from internet art and social media in the 2000’s to Jean-François Lyotard’s groundbreaking new media exhibition at the Centre Pompidou in 1985 Les Immatériaux, her dissertation asks how the widespread technological capture of information affects cultural production, specifically contemporary art, and the kind of critical response it necessitates. Her writing has appeared in Rhizome, Art in America, ArtAsiaPacific, Artforum, The Wire, Performa Magazine, New Media & Society and various art catalogs. Prior to her position at YBCA, she was the Senior Editor of the art and technology non-profit arts organization Rhizome, Special Projects Coordinator for the New Museum/Rhizome and an Adjunct Instructor at New York University in the Department of Comparative Literature. From 2000-2014, she programmed a radio show dedicated to experimental music, Radio Heart, on the independent radio stations KALX, East Village Radio and Radio Valencia.
More from Ceci Moss:
Reply to this Announcement
You must be logged in to post a comment. Log In
Advertise on Rhizome with Nectar Ads
Active Discussions
Fuori Dalla Cerchia (0 posts)
Last comment 4 years, 3 months ago by
Yamil Orlando
Interspherence Patterns (1 post)
Last comment 4 years, 3 months ago by
Edwin VanGorder
Collective W.S.G. (Weird Shape Generator) (0 posts)
Last comment 4 years, 3 months ago by
Jazzmike
Autumn Offerings : Trace and Rhizome (1 post)
Last comment 4 years, 3 months ago by
Edwin VanGorder
Plantoid: the blockchain-based art that makes itself (1 post)
Last comment 4 years, 3 months ago by
marc garrett
Community Deadlines
Dec
31
Thu
Call for Participation:
invitation to contribute a short text on art education
Posted by Michael Szpakowski