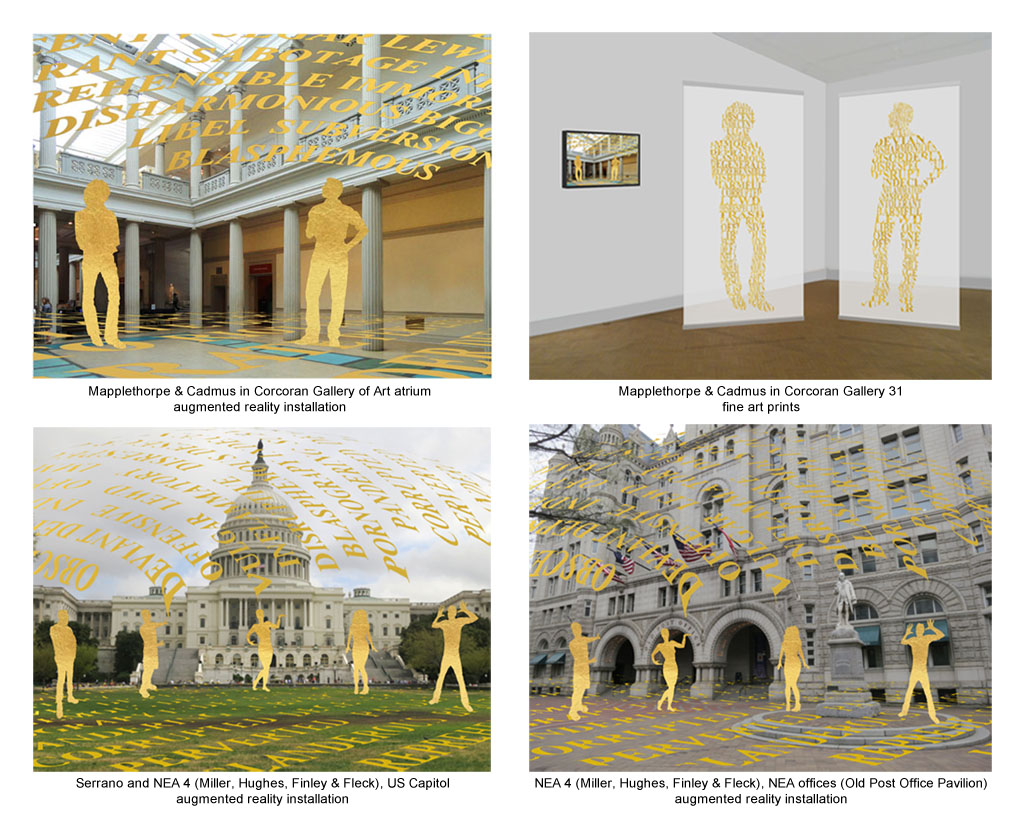 Censorship tries to condemn artists and their artworks to absence and invisibility. In cases that attract widespread public notice, artists can actually gain prominence when their works are censored. In the majority of cases however both the artists and their work disappear soundlessly from the public discourse, with artists fearing negative consequences if they challenge the censors.

“Shades of Absence: Governing Bodies” is the fourth work in a series on censorship in the visual arts, which premiered at an intervention into the 2011 Venice Biennial. Images of contemporary artists whose works have been censored by (or due to threats by) members of the US government are reduced to silhouettes and surrounded by terms of transgression. The erased figures stand for countless lesser known artists who face censorship or persecution with no public support.

Its physical manifestation in the Gallery 31 references Robert Mapplethorpe and Paul Cadmus; the virtual manifestation additionally references (among others) the NEA 4 and Andres Serrano. It is visible all throughout the Corcoran Gallery of Art, the Capitol Building and the NEA offices at the Old Post Pavilion, an axis of fierce public battles over censorship in the arts.

The augmented reality (AR) component of this work uses the ability of AR to penetrate walls and invade protected spaces, and manifest its presence at a site that gives the work added meaning. Viewers can touch the work on the display of their own smartphones to see information on these censored artists.

Tamiko Thiel is a visual artist exploring the interplay of place, space, the body and cultural memory. She is an internationally acknowledged pioneer in developing the dramatic and poetic capabilities of virtual and augmented realities to create spaces of memory for exploring social and cultural issues. Her virtual and augmented installations seek to reify the invisible webs of meaning that bind place and memory together to create what we call “culture,” while actively engaging the viewer's kinesthetic body sense to meld this virtual imagery with the physical experience of a space or a site to create a new form of reality. She has a B.S. and M.S. in engineering from Stanford University and the Massachusetts Institute of Technology (MIT) and an M.A. from the Academy of Fine Arts in Munich/Germany. She has taught and lectured at institutions such as Carnegie Mellon University, the MIT Media Lab, Harvard University, the Bauhaus-University in Weimar/Germany, the University of Southern California School of Cinema-Television, the Berlin University of the Arts and Nanyang Technological University Singapore. She exhibits internationally in venues such as the Istanbul Biennial, the International Center for Photography/New York, the ICA Boston, the ZKM in Karlsruhe/Germany and the Tokyo Metropolitan Museum of Photography. Her art commissions include institutions such as the Zero1 Biennial in Silicon Valley, the Foundation for Art and Technology (FACT) in Liverpool, the Goethe-Institut and the Seattle Art Museum Olympic Sculpture Park. As a founding member of the augmented reality artist group Manifest.AR she participated in the pathbreaking uninvited intervention “We AR in MoMA” at MoMA NY in 2010, and was the main curator and organizer of their intervention into the Venice Biennial in 2011. Her grants and fellowships include the MacDowell Colony, the Grand Prize of the IBM Innovation Award for Art and Technology, WIRED Magazine, the Massachusetts Institute of Technology Center for Advanced Visual Studies, the Japan Foundation, Arts Council England and the Berlin Capital City Cultural Fund (Hauptstadtkulturfonds). She was Visiting Artist in the Duke University MFA program in Experimental and Documentary Arts, and Augmented Reality Artistic Advisor for the Caribbean Cultural Center and African Diaspora Institute (CCCADI) project “Mi Querido Barrio” in East Harlem/New York, for which she helped bring in a grant from the Rockefeller Foundation Cultural Innovation Fund.
Reply to this Announcement
You must be logged in to post a comment. Log In
Advertise on Rhizome with Nectar Ads
Active Discussions
Fuori Dalla Cerchia (0 posts)
Last comment 4 years, 5 months ago by
Yamil Orlando
Interspherence Patterns (1 post)
Last comment 4 years, 5 months ago by
Edwin VanGorder
Collective W.S.G. (Weird Shape Generator) (0 posts)
Last comment 4 years, 5 months ago by
Jazzmike
Autumn Offerings : Trace and Rhizome (1 post)
Last comment 4 years, 5 months ago by
Edwin VanGorder
Plantoid: the blockchain-based art that makes itself (1 post)
Last comment 4 years, 5 months ago by
marc garrett
Community Deadlines
Dec
31
Thu
Call for Participation:
invitation to contribute a short text on art education
Posted by Michael Szpakowski