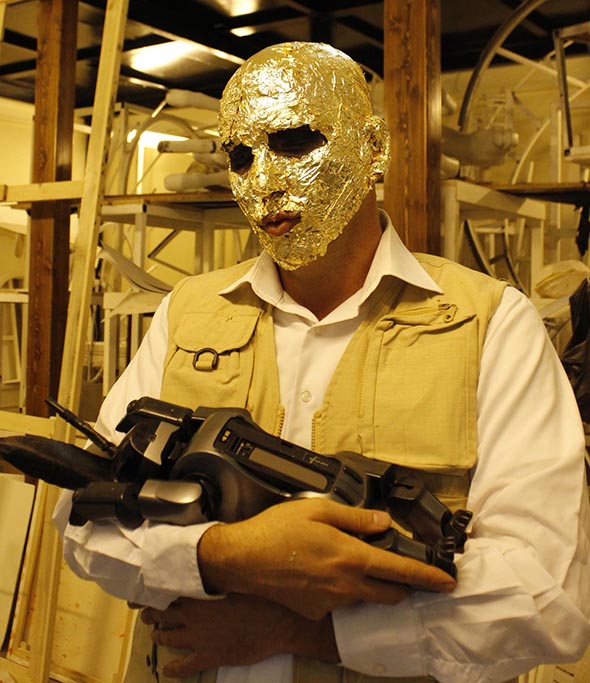 “Nothing of me is original.
I am the combined effort of everyone I've ever known.”
(Chuck Palahniuk, Invisible Monsters)

Modernism created a fairy tale about personal freedom, unique identity and personality as well as the trust in individuality, subjectivity and authenticity. The current continuation of this story tells us today to believe in ourselves, to become the creator of our world, and to overcome all rules of totalitarianism and absolutism. NLP coaches and personal trainer, as well as advertisement and media professionals claim that nothing is impossible if you just to do it and only believe in yourself. Sounds right, seems right. Though, what is the self? How can you be individual in the overwhelming power of social, political and cultural conventions and agreements? Can one be authentic in the age of absolute medial visibility, where everything is observed, recorded and shared?

Obviously, the current notion and meaning of identity changed from the ones that our parents and grandparents were facing. Today’s understanding of identity is fluid, and in a state of permanent change. So, the forming of the ego and the self are dynamic processes, where individual stories get merged with social history. Nevertheless, we still look in the mirror and have faith in its reflection, as we believe it shows us the true image of ourselves. We talk with people, try to be social and trust their evaluation of our actions. We take part in the world of social media, where we produce, share, edit and curate information, as well as hope to form an attractive but decent cyber identity, which should suit and represent the real one. Though, what is real? Is reality not just another believe, a confidence in a truth that lies outside of our body, and therefore might just be another hallucination? We have no chance, but to believe in what we see, but what we see might be just a big lie, a trick of our mind.

Genco Gülan plays in his current series 'Self-portrait?' a game with identity, as he reveals and questions ideas of identity, and personality as well as their constructiveness. The works present the artist in various poses that are inspired by portraits of world famous artists. On the one hand he imitates the originals in every detail. That is why these pieces could be interpreted as final shots of a performative act, in which Gülan imitates Warhol, Pollock, Paik and many other artists. Though, as Genco Gülan’s ouvre is deeply influenced by new media art and net art, in every image, the careful spectator finds hints and relicts of the digital age. So, in an absurd and ironic way, you see Warhol-Gülan with a mobile phone, Paik-Gülan with a monitor instead a television and Pollock-Gülan with a laptop that seems to play the free-jazz to which the original Pollock was listening during his action-painting. Gülan’s works can be understood as a personal reference regarding the sources of his own artistic work. Already before this series, in works like Vincent (2003), Zonaro (2010), or Osman Hamdi (2007), he dealt with self-portraits of artists. Also in his current series, the pieces can be understood as a tribute to great artists that he values and from which he is inspired. Though, the works are more than simple tributes like we know them from other art appropriation works. Like a DJ, Gülan creates a combination of reproductions, remakes and remixes of the original photo-portraits, and formulates his own comments by adding objects, which contain subversive personal references. He reconstructs self-portraits and images of artists, and later gets into the role and pose they showed. Therefore, Genco Gülan intermingles two portraits: The image of the original artist and the image of himself. That is why, we see two individuals and their personalities in one figure. A schizophrenic effect occurs, in which the spectator constantly shifts between the reorganization of the original artist and the observation of Gülan’s imitation. Who do we see? Which image is the original in his work? Which visual layer is the dominant parameter?

Identity is a major issue for every artist, because it is one of the sources and motors of artistic production. In this series, Genco Gülan exposes and erases his identity at the same time. He plays Warhol, Pollock, Paik, Beuys and the other titans of art history but never becomes them. His own image always remains on the surface of his remix. In the end, we observe an eclectic, heterogeneous and pluralistic idea of identity and artistic personality, a visual investigation of their lies and truths created by Genco Gülan. Though, who is Genco Gülan?