Jacqueline Kiyomi Gordon: It Only Happens All of the Time 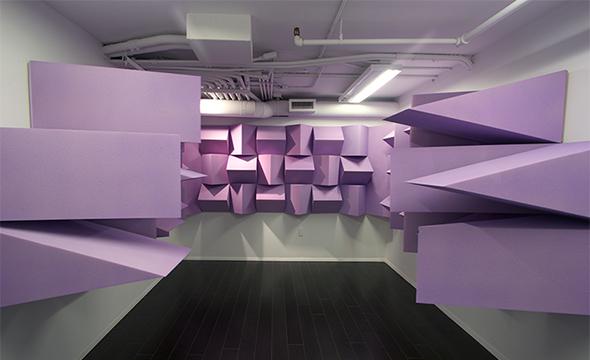 Los Angeles-based artist Jacqueline Kiyomi Gordon works in sound, installation, and sculpture. Her work is often devised around audio and spatial feedback systems that manipulate the visitor’s awareness of sound and space, incorporating the physical and sonic qualities of surrounding architecture to engage the viewer’s senses. Gordon investigates sonic and architectural applications of cybernetic systems in the 20th and 21st centuries to technological design, from anechoic chambers to the military’s use of Long Range Acoustic Device (LRAD) speakers. Reverse engineering those implements of social control, the dissonant spaces she creates uncover how such systems regulate human subjectivity, mobility, and perception.

Commissioned by YBCA, Gordon’s new installation—part of her solo exhibition It Only Happens All of the Time—is an immersive sonic experience that emphasizes the primacy of the embodied experience; one that encourages the visitor to navigate the space through a mode of listening that is both felt and heard. Gordon explores sound’s ability to establish different levels of intimacy, and the exhibition’s title points towards the ubiquitous presence of sound in that process, whether it exists at the periphery or center of our awareness. The installation’s sound-absorbing walls reference the design of anechoic chambers found in military and scientific testing facilities, which insulate and absorb sound reflections. In contrast to the walls of the installation, which gestures towards a calculated experience, the sculpture Love Seat situated within this contained environment suggests another, more emancipated, arrangement. Surrounded by a multichannel speaker system distributed throughout the gallery, Love Seat encourages visitors to sit and share in a listening experience with others, while maintaining a physical separation. Fostering an exchange between visitors that wavers between proximity and distance, Love Seat parallels how we listen together.

Gordon’s other works for the exhibition echo a similar concept—sound as experienced within the body becomes a way to feel with others, and to experience the mechanisms of built space through non-visual means. Her film Everyone Will Be Here Now But Me documents a site-specific sound environment created within the empty offices of the Los Angeles Food Center. It follows visitors as they explore sound installations distributed throughout the building, with the option to listen through binaural microphones that captured the 3D stereo sound of the space. The suspended figures in Gordon’s new series of drawings and watercolors Filter Resonance B more subtly signal the body; wire-like lines protrude and drift through these organ-like forms, a reference to the potential for connectivity. Gordon imagines that the drawings represent actual filters, which isolate information, and their presentation is meant to evoke the interfaces of audio filters in music software, which allow the user to directly regulate reverb, equalization, and so on by manipulating graphic elements. Much like the show itself, these strange configurations invite reflection on the many ways the body is instrumentalized through technology.

About Control: Technology in Culture

Control: Technology in Culture, curated by Ceci Moss, Assistant Curator of Visual Arts, is YBCA’s new series of exhibitions showcasing work by emerging and mid-career artists who examine the social, cultural, and experiential implications of technology. The series seeks to prompt timely questions about the profound and far-reaching influence of technology in our daily lives by focusing on artists whose work spans a multitude of disciplines and relates to a diverse set of issues, including architecture, acoustics, psychology, labor, consumerism, the environment, and the military.

The term “control” refers to philosopher Gilles Deleuze’s theory that, as a result of the ever-increasing role of information technology, Michel Foucault’s “disciplinary society” of the 20th century has given way to a “control society” in the 21st century. In contrast to discipline, which molds the individual through confinement in factories, prisons, and schools, control is diffuse, adaptable, and ubiquitous, modulating rather than molding the individual.

Ceci Moss is the Assistant Curator of Visual Arts at Yerba Buena Center for the Arts in San Francisco and an Adjunct Professor at San Francisco Art Institute. She is responsible for coordinating several exhibitions (both solo and group shows) each year, special projects, public art commissions, and public programs for YBCA. Highlights include solo exhibitions by Jacqueline Kiyomi Gordon, Lucy Raven, Nate Boyce, Shana Moulton, and Brenna Murphy, a large scale public art installation by Kota Ezawa in YBCA’s sculpture court, and YBCA’s signature triennial Bay Area Now 7 co-curated with Betti-Sue Hertz. She also co-curated with Astria Suparak the exhibit Alien She that examines the lasting influence of the punk feminist movement Riot Grrrl on contemporary artists, and toured to five venues nationwide. She has a MA and PhD in Comparative Literature from New York University, and a BA in History and Sociology from U.C. Berkeley. Her academic research addresses contemporary internet-based art practice and network culture. Her PhD dissertation "Expanded Internet Art and the Informational Milieu" examines the expansion of internet art beyond the screen in the 2000’s, especially towards sculpture and installation, as a product of what theorist Tiziana Terranova called an “informational milieu.” Combining art history and media theory through the analysis of case studies that range from internet art and social media in the 2000’s to Jean-François Lyotard’s groundbreaking new media exhibition at the Centre Pompidou in 1985 Les Immatériaux, her dissertation asks how the widespread technological capture of information affects cultural production, specifically contemporary art, and the kind of critical response it necessitates. Her writing has appeared in Rhizome, Art in America, ArtAsiaPacific, Artforum, The Wire, Performa Magazine, New Media & Society and various art catalogs. Prior to her position at YBCA, she was the Senior Editor of the art and technology non-profit arts organization Rhizome, Special Projects Coordinator for the New Museum/Rhizome and an Adjunct Instructor at New York University in the Department of Comparative Literature. From 2000-2014, she programmed a radio show dedicated to experimental music, Radio Heart, on the independent radio stations KALX, East Village Radio and Radio Valencia.
More from Ceci Moss: