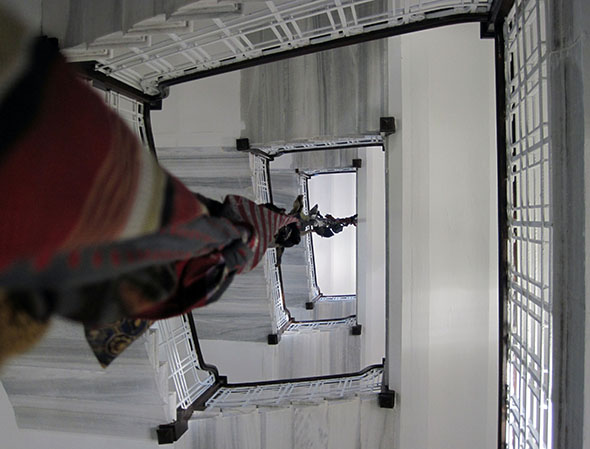 Conceptual artist Genco Gülan’s site-specific installation, ‘The Great Conjugation’, will be exhibited at Boğaziçi University’s Faculty of Economics and Administrative Sciences building, Washburn Hall. After 23 years, the artist returns to the building where he completed his undergraduate studies. This time he ties the twin towers of the historical building together from inside.

The artist, Genco Gülan’s site-specific installation series continues at Boğaziçi University’s Faculty of Economics and Administrative Sciences building, Washburn Hall. The project which changes and transforms depending upon the location will be displayed not in a museum but this time in an academic institution. Gülan’s installation named ‘The Great Conjugation’ could be seen at Washburn Hall through May and June 2014.

Gülan used approximately 1000 ties for this installation. All of the connected ties create a route tens of meters long and the line flows through the all five floors of the building. The ties connect the twin towers of the building from the inside which was built in 1906. Gülan invites the viewers to bring their ties and add them to the installation the generate a second level of participation.

Gülan’s work of art is not descriptive, it does not involve just one explanation. Both the objects that are used and the space-time relationship between them give a range of meaning to the piece. What Gülan tries to do is to constitute new semantic connections and summon new connotations by using the association of ideas. While he is doing that he claims the role of ‘playmaker’ and tries to be almost out of the picture. Even if the method is referring to Nicolas Bourriaud’s concept of relational aesthetics, the soft sculpture that came to life is more plastic and political among its contemporaries.

The ties that are used in the project have different colors, designs, brands and they were made in different countries. They were gathered from hundreds of domestic and abroad donators. The ties some of which are silk, nylon and wool conjugate and become a whole. The same ties were exhibited and greatly appreciated by viewers in The Thessaloniki State Museum of Contemporary Art and Ankara Contemporary Art Center in 2013. At the first display in Istanbul, they were attached with a crane to a skyscraper and rised 160 meters from the ground.

Genco Gülan was selected as a finalist at Sovereign Art Foundation European Art Prize in 2011. He had opened his first exhibition at White Saloon inside the Faculty of Economics and Administrative Sciences building where he had also taken lots of courses while he was studying at the Department of Political Science and International Relations between 1987 and 1991. Gülan still gives lectures at the University he graduated from. ‘The Great Conjugation’ project is happening with the contributions of Prof Dr. Ayşe Gül Toker and the Faculty Secretary Hatıra Şenkon.

Genco Gülan is a conceptual artist with an interest in new media and performance art. He studied Political Science and Art at Bogazici University then he pursued an MA degree on Media Studies at New School, New York. He got prizes from BP, New School, Lions, E.M.A.F. Nominated for the European Art prize in 2012 and got selected as a finalist. Gülan made solo shows in Istanbul, Ankara, Graz, Berlin, New York, Seoul and Zagreb. His works are presented in museums such as; Centre Pompidou, Pera, ZKM, MAM, Rio and La Triennale di Milano. He participated to festivals such as; Steirishes Herbst, Ars Electronica, Mediaterra, prog-me, Accente, Balkan Art and Istanbul Festival. His net-art pieces have been exhibited at irishmuseumofmodernart.org, rhizome.org and kanonmedia.com/ His works listed in required reading lists such as; City University, New York, Rice University and U.C. Santa Barbara. Gülan gave conferences at Yale, School of Visual Arts, Köln University and New York Institute of Technology. Genco Gülan and his art has been referred to by Newsweek, Herald Tribune, NY Arts, Art in America, Art News, Das Kunst, Beaux Arts and Idomenee. His monography edited Dr. Marcus Graf is published by Revolver Berlin the title "Conceptual Colors of genco Gulan". His book "De-Constructing the Digital Revolution" is published by LAP and both of the books are available at amazon.com/ Genco Gülan was in the Advisory Board of Balkan Biennial, Thessaloniki and International Programming Committee of ISEA Singapore. He is the founder of the Web Biennial. Currently he teaches at Mimar Sinan Academy and Bogazici University.
More from Genco Gulan:
Comments (1)
Reply to this Announcement
You must be logged in to post a comment. Log In
Advertise on Rhizome with Nectar Ads
Active Discussions
Fuori Dalla Cerchia (0 posts)
Last comment 4 years, 7 months ago by
Yamil Orlando
Interspherence Patterns (1 post)
Last comment 4 years, 7 months ago by
Edwin VanGorder
Collective W.S.G. (Weird Shape Generator) (0 posts)
Last comment 4 years, 7 months ago by
Jazzmike
Autumn Offerings : Trace and Rhizome (1 post)
Last comment 4 years, 7 months ago by
Edwin VanGorder
Plantoid: the blockchain-based art that makes itself (1 post)
Last comment 4 years, 7 months ago by
marc garrett
Community Deadlines
Dec
31
Thu
Call for Participation:
invitation to contribute a short text on art education
Posted by Michael Szpakowski