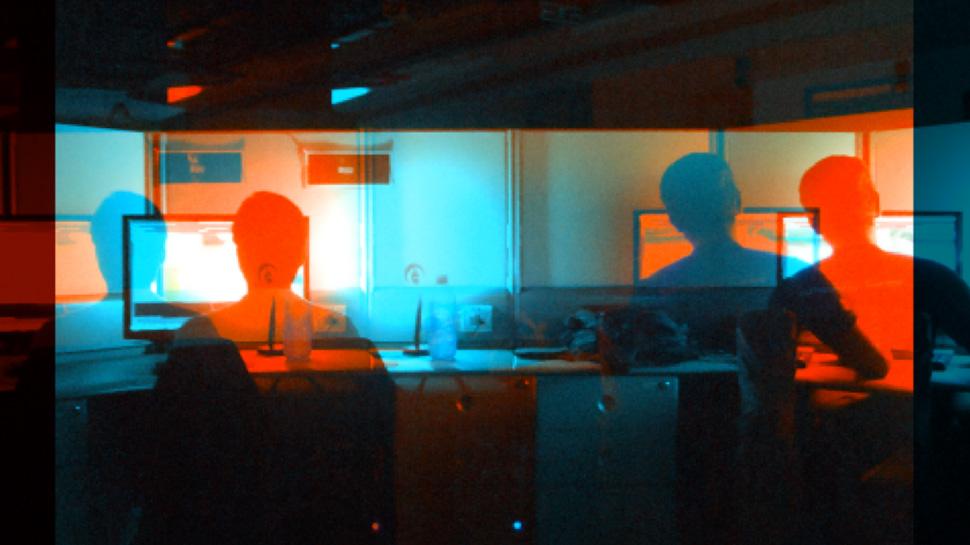 New York-based artist Lucy Raven uncovers the diffuse, obscured systems that support contemporary life through a research-led practice that encompasses films, installations, illustrated lectures, and essays. Deeply attuned to the processes of production often unseen within visual culture in a networked, globalized world, Raven’s contemplative storytelling uncovers the economic, historical, geographic, and material complexities at play in technology through an exploration of topics such as the outsourcing of post-production work for the film industry from Hollywood to countries around the world, evolving technical standards in film projection, and the immense infrastructure behind the global copper mining industry.

For her solo presentation at YBCA, Raven stages a new anaglyph 3D video installation entitled Curtains (2014). The project emerges out of the artist’s ongoing research into the global network of post-production facilities that create the visual effects for Hollywood’s blockbuster films. Post-production is meticulous and labor intensive, involving hours of frame-by-frame detailing. Film studios seek the least expensive labor force worldwide to complete their work, outsourcing labor to studios that span Bombay, Beijing, Toronto, London, and Vancouver. Raven visited and documented some of these spaces through sound and image. The result is Curtains, a 3D video that creates a portrait of an otherwise invisible global assembly line, providing a glimpse into the quiet reality and human hands that lie behind the spectacle of fantastic computer-generated simulations found in today’s mainstream films.

A series of screenprints from Raven’s ongoing RPx project are also featured in the exhibition, as well as a new lenticular print. RPx emerged from research undertaken during a 2011 residency at the Hammer Museum in Los Angeles, where Raven unearthed and archived motion picture test patterns used by projectionists to calibrate the quality of film projection. The “RP” in Raven’s project stands for “recommended practices,” a directive set by the standards-developing committee in Hollywood, the Society of Motion Pictures, and Television Engineers (SMPTE) to ensure continuity across viewing experiences. The test patterns featured in the RPx prints are images meant for machines and the technicians who maneuver them, a relic and a precursor to the standards that surround our current high definition images. Both RPx and Curtains point towards the careful engineering involved in the fabrication of illusion, including the construction of human vision within that process.

About the Series
Control: Technology in Culture is a new series of exhibitions in the YBCA Upstairs Galleries showcasing work by emerging and mid-career artists who examine the social, cultural, and experiential implications of technology. The exhibitions in this series seek to prompt timely questions about the profound and far-reaching influence of technology in our daily lives by focusing on artists whose work spans a multitude of disciplines and relates to a diverse set of issues, including architecture, acoustics, psychology, labor, consumerism, the environment, and the military.

The term “control” refers to philosopher Gilles Deleuze’s theory that, as a result of the ever-increasing role of information technology, Michel Foucault’s “disciplinary society” of the 20th century has given way to a “control society” in the 21st century. In contrast to discipline, which molds the individual through confinement in factories, prisons, and schools, control is diffuse, adaptable, and ubiquitous, modulating rather than molding the individual.

Ceci Moss is the Assistant Curator of Visual Arts at Yerba Buena Center for the Arts in San Francisco and an Adjunct Professor at San Francisco Art Institute. She is responsible for coordinating several exhibitions (both solo and group shows) each year, special projects, public art commissions, and public programs for YBCA. Highlights include solo exhibitions by Jacqueline Kiyomi Gordon, Lucy Raven, Nate Boyce, Shana Moulton, and Brenna Murphy, a large scale public art installation by Kota Ezawa in YBCA’s sculpture court, and YBCA’s signature triennial Bay Area Now 7 co-curated with Betti-Sue Hertz. She also co-curated with Astria Suparak the exhibit Alien She that examines the lasting influence of the punk feminist movement Riot Grrrl on contemporary artists, and toured to five venues nationwide. She has a MA and PhD in Comparative Literature from New York University, and a BA in History and Sociology from U.C. Berkeley. Her academic research addresses contemporary internet-based art practice and network culture. Her PhD dissertation "Expanded Internet Art and the Informational Milieu" examines the expansion of internet art beyond the screen in the 2000’s, especially towards sculpture and installation, as a product of what theorist Tiziana Terranova called an “informational milieu.” Combining art history and media theory through the analysis of case studies that range from internet art and social media in the 2000’s to Jean-François Lyotard’s groundbreaking new media exhibition at the Centre Pompidou in 1985 Les Immatériaux, her dissertation asks how the widespread technological capture of information affects cultural production, specifically contemporary art, and the kind of critical response it necessitates. Her writing has appeared in Rhizome, Art in America, ArtAsiaPacific, Artforum, The Wire, Performa Magazine, New Media & Society and various art catalogs. Prior to her position at YBCA, she was the Senior Editor of the art and technology non-profit arts organization Rhizome, Special Projects Coordinator for the New Museum/Rhizome and an Adjunct Instructor at New York University in the Department of Comparative Literature. From 2000-2014, she programmed a radio show dedicated to experimental music, Radio Heart, on the independent radio stations KALX, East Village Radio and Radio Valencia.
More from Ceci Moss: