The Anti- "The Innocence of Islam" Video Petition

The Anti- "The Innocence of Islam" Video Petition

We, the people of the world of all faiths, and in good conscience, DO NOT approve of the video "The Innocence of Islam," and those who created it. We believe all peoples have an inherent right to practice their faith in peace. We feel that "The Innocence of Islam" is the product of the divisive forces of hatred and ignorance, and does not reflect the opinion of the majority of people in the world, who practice their religious traditions in the spirit of peace, love, and mutual understanding. We apologize, as citizens of an enlightened humanity, for the offense committed by this movie, and extend our hands in peace and understanding.
Whether or not the makers apologize, we will. 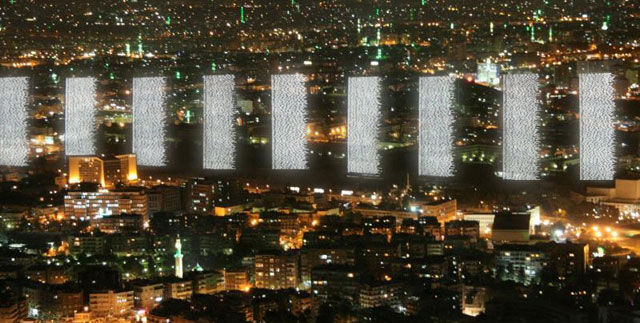 A goal of the project is to create a voice for those in the global community who denounce the "Innocence of Islam" Video. The names collected will be viewed as a slow scrolling list on the project website and world-wide with augmented reality [AR]. The AR petition will not be placed near the protests. Instead they will be placed in the "safest" public locations possible. The list may also load at the viewers current location with a supported smart phone.

This project was organized by Mark Skwarek, Patrick Lichty, and Wafa Bourkhis. It is a work in progress and we would like feedback.

Mark Skwarek is an artist working to bridge the gap between virtual and physical world with augmented reality. His art explores the translation our everyday digital experience into the physical world using mobile augmented reality. Skwarek earned his M.F.A. from Rhode Island School of Design's Digital Media Department. He is full time faculty at New York University's School of Engineering, the CEO of Semblance Augmented Reality and the director of NYU's Mobile Augmented Reality Lab. He teaches 3D Graphics and the Augmented Reality Grad Class. He organized the augmented reality artist group manifest.AR, the arOCCUPYWALLSTREET movement, and co-organized We AR in MoMA. Skwarek’s practice is also largely based in art activism with emerging technologies. He has a long record of international augmented reality work, ranging from “erasing” the DMZ battlements between North and South Korea (a piece he did on site), to the virtual elimination of the barricades between Palestine and Israel, at the Gaza Strip. He has created political work and symbols in a variety of locations across the United States, including pieces at Wall St., U.S. Mexico Border and the White House to name a few. His artwork has been written about by the New York Times, Art in America, Boing Boing, WIRED, the Boston Globe, The Huffington Post, NPR, BBC, the Discovery Channel, Leonardo, and Creative Capital. Skwarek has exhibited in various venues, including: the Institute of Contemporary Art, Boston; ISEA; Dumbo Arts Festival, UCLA Digital Grad Gallery; the CyberArts Festival; the Sunshine International Art Museum, Beijing; and the Krannert Art Museum at the University of Illinois, FACT in Liverpool England, Siggraph 2013, The 2013 Augmented World Expo, The Corcoran Gallery of Art, Kasa Galeri, and Contemporary Istanbul.
More from Mark Skwarek:
Reply to this Announcement
You must be logged in to post a comment. Log In
Advertise on Rhizome with Nectar Ads
Active Discussions
Fuori Dalla Cerchia (0 posts)
Last comment 4 years, 2 months ago by
Yamil Orlando
Interspherence Patterns (1 post)
Last comment 4 years, 2 months ago by
Edwin VanGorder
Collective W.S.G. (Weird Shape Generator) (0 posts)
Last comment 4 years, 2 months ago by
Jazzmike
Autumn Offerings : Trace and Rhizome (1 post)
Last comment 4 years, 2 months ago by
Edwin VanGorder
Plantoid: the blockchain-based art that makes itself (1 post)
Last comment 4 years, 2 months ago by
marc garrett
Community Deadlines
Dec
31
Thu
Call for Participation:
invitation to contribute a short text on art education
Posted by Michael Szpakowski