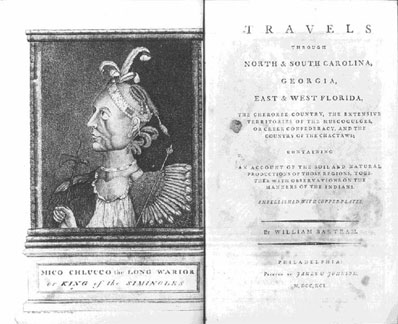 "THIS world, as a glorious apartment of the boundless palace of the sovereign Creator, is furnished with an infinite variety of animated scenes, inexpressibly beautiful and pleasing, equally free to the inspection and enjoyment of all his creatures."

Thus begins 18th Century American botanist John Bartram's natural history classic (and verbosely titled), Travels Through North & South Carolina, Georgia, East & West Florida, the Cherokee Country, the Extensive Territories of the Muscogulges, or Creek Confederacy, and the Country of the Chactaws; Containing An Account of the Soil and Natural Productions of Those Regions, Together with Observations on the Manners of the Indians. Bartram not only recorded his observation and taxonomies, but also imbued them with commentary and personal mediations on American wilderness and all its inhabitants. American artist Mark Dion has long focused his work on the subject of natural history, the scientific method, and the tension between objective and subjective accounts of the natural world. In his most recent project Travels of William Bartram- Reconsidered , Dion follows the path of Bartram through Northern Florida while keeping a journal, collecting specimens (both natural and manmade), taking photographs, and recording audio and video. Like his predecessor, Dion is also publishing his travels, but in web form, allowing us to follow him on his journey in a more immediate sense. He left Bartram's Gardens in Pennsylvania on November 15th and since then has searched for Bartram's 'infinite variety of animated scenes' in the swamps of northern Florida, the bars of New Orleans, and a flea market in Charleston. Humanity is not 'other' in Dion's scientific journey. His specimens include items of botanical interest, but also images of golf carts and the fishermen who save them in a swamp. All are part of the pantheon that, for better or worse, now comprise our 'natural world.' An exhibition of Travels of William Bartram- Reconsidered will open at Bartram's Gardens in June. - Caitlin Jones