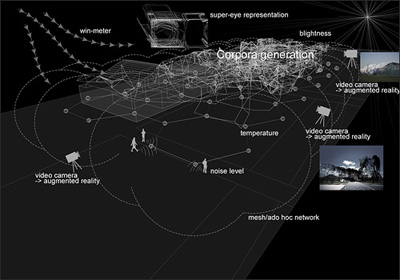 Those living in Japan or traveling in the area for the holiday season should make a point to visit the Yamaguchi Center for Arts and Media (YCAM) and witness Corpora in Si(gh)te, a commissioned installation by Japan's doubleNegatives Architecture. The renowned interactive architecture firm has created a stunning environment that is in essence a mesh architectonic organism 'living' in the museum. In the project, "a number of sensors are set up forming a mesh network through the area of YCAM in order to collect and distribute real-time environmental information such as temperature, brightness, humidity, wind direction, and sound." This data is then processed and the shifting structure responds accordingly. Each structural node functions independently based on the sensor information and gives rise to a form that exists beyond the architect's design. The end result is as complicated and utterly fantastical as it sounds. Underlying Copora in Si(gh)te is the concept of the "Super-Eye," an approach to orientation in which one's position in relation to their surroundings is exhibited in reverse-projection; essentially one can view an object from the inside-out as opposed to outside-in. The technological and philosophical implications are fascinating, and both a blessing and a curse. One can't help wondering what Michel Foucault would make of such a project. If it is true that "visibility is a trap" as he suggested in his society-as-panopticon critique, Corpora in Si(gh)te is truly unsettling, and all the more decisive for it. - David Michael Perez