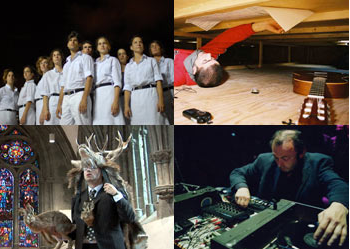 For better or for worse, 'translation' and that which gets lost in its operations has become a significant cultural paradigm in the last few decades. Both romanticized and politicized, it is a site for both cultural misunderstanding and a redemptive space of new relational politics. Embracing all of these facets is Ha'Pzura, an international and interdisciplinary event presented by the Israeli Center for Digital Art in Holon. The country of Israel is, of course, a crucial context in which to explore the politics of cultural translation. Ha'Pzura encapsulates several overlapping programs, including an exhibition, concert series, sound interventions, and a radio station. The exhibition component, Works in Translation, explores the interstitial moments of communication and translation where language falters. The artists included, such as Adriana Garcia Galan, Eva Koch, and Imogen Stidworthy, question the very foundations of sound and language in their work. Meanwhile, this past week the old center of Holon witnessed a different public intervention in sound between the hours of 3 and 8 pm; British artists Marcus Coates enacted his singular shamanistic rituals while the ever thrilling sound artist Edwin van der Heide made the center his own personal broadcast antenna. The roster of musicians performing is impressive, including Faust, Phillip Jeck, Mapstation and closing the performance segment will be digital improvisers Eddie Prevost and John Butcher. - David Michael Perez