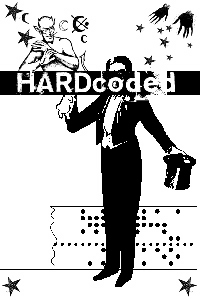 Commenting on our relationship with modern science, writer and futurist Sir Arthur C. Clark famously stated that "any sufficiently advanced technology is indistinguishable from magic." A highly cited quote that connects the most hi-tech gadgetry of today to the illusionism of yesterday. Tapping into this approach is HARDcoded, "an ongoing collaboration between new media artists in Chicago and Mexico City, that explore the cross-over between digital noise, punk, and magic." This collaboration will surface as a day of workshops, screenings, and performances being held in Chicago at the space EN3MY and being simultaneously broadcast in Mexico City at CentroMultiMedia and the Border on December 8th, 2007. Mark Beasley, The Chicago Hacked Hardware Orchestra, Criticalartware, Paul Hertz, and Temporary Services are among the participating artists who, along with the organizers, seek "to create a space where ruptures in our digital playing field (glitch, noise, + hacked/repurposed material/tools) can take precedence over the norms of our contemporary static digital landscape." New media art is defined by the exploration of new, networked technologies; HARDcoded stands apart for its introduction of magic--awe and punk-style trickery--into the mix. -- David Michael Perez