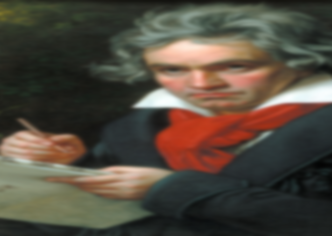 A great deal of lore surrounds Ludwig Van Beethoven's arguably most famed and final composition, Symphony No. 9, including that he was completely deaf when he wrote it. When the original manuscript sold for millions at Sotheby's, their head of manuscripts, Dr. Stephen Roe said that it "is one of the highest achievements of man, ranking alongside Shakespeare's Hamlet and King Lear." While the 1990s mixtapes by Houston's DJ Screw have yet to go to auction, I wouldn't put them too far behind such grand achievements. Screw founded the genre of hip hop music now known as Chopped and Screwed, a slowed down and psychedelic urban form which is now a mainstream aesthetic vis-a-vis recording artists Paul Wall, Mike Jones, Slim Thug, et al. Merging these two disparate forms is 9 Beet Stretch, a sound installation of Beethoven's famed symphony slowed down to stretch over the course of twenty-four hours. Created by Norwegian artist Leif Inge using Snd or Common Lisp Music Software, 9 Beet Stretch will be first exhibited at the Ars Numerica festival in Montbeliard, France from December 14th to the 22nd, before traveling to the Orange County Museum of Art in 2008. For interested parties not local to those to areas, a webcast of the work is running online 24/7. Whether listening for ten minutes or ten hours, the work offers a new temporal sonic space and a touchstone for microtonal enthusiasts. -- David Michael Perez