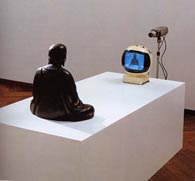 Eddying in the Flows of Media

"In 1974 Nam June Paik placed a statue of Buddha in front of a TV that displayed live feedback of the figure and titled it TV Buddha (fig. 1). The Buddha, an Eastern symbol of meditation and enlightenment, used in conjunction with the then-new technology of the closed-circuit loop, raises interesting questions about the relationship between subjectivity and media technology. Does the Buddha meditate upon itself or is it just another media effect, an eternal return of the simulated image of the self? Along with Paik's other experiments with the new medium of video in the 1970s, TV Buddha reflected an early understanding of the control that media potentially had over the intellectual life of its viewers, while at the same time expressing Paik's hope in its possibilities as an instrument of cultural exchange.1 The tension of TV Buddha resides in the precarious balance between meditation and mediation, between the consciousness and the constructedness of the self.

Approaching the relationship between subjectivity and media from a background in minimalism and performance, Bruce Nauman began exploring ways to actively involve the viewer. In Live-Taped Video Corridor, 1970, Nauman used closed-circuit video as part of a larger installation involving a too-narrow corridor to confound the participant's spatial understanding. Mainly by attempting to alienate or otherwise aggressively engage museumgoers, Nauman has continued to explore the spectatorial role.2 With Think in 1993, (fig. 2) he created a piece in which a seemingly passive viewing state roughly akin to Paik's Buddha is prodded into contemplation. Placing two monitors together, one upside down and on top of the other, each playing a looped video disc displaying his head moving into the screen, yelling "THINK", Nauman took an even more aggressive stab at the way in which TV dictates, through direct address, the thoughts of the viewer.

The circulating systems of these two loops (Paik's an indefinitely running live video feed, and Nauman's a continuously repeating video disc), in which media generates the self and the self affirms media, pose the question of how we actually begin to approach thought or contemplation inside of the seemingly circular logic of media culture. Though made almost twenty years apart, both loops offer a common ground on which to address these questions. Their answer lies not in the alteration and subversion of the image, but in the duration and iteration of representation itself. Paik and Nauman were fascinated by the technical novelty of feedback and looping as well as their psychological and phenomenological effect on viewers. They both use the loop to mimic the temporal logic of repetition in the media, injecting humor and absurdity as a way to point to and potentially disrupt this condition from within." Continue reading The Way We Loop "Now:" Eddying in the Flows of Media by Jaimey Hamilton, Invisible Culture Issue 8.