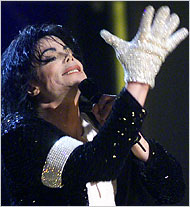 A research project roped thousands of volunteers into some Michael Jackson-watching, with entertaining results.
Published by David F. Gallagher.

The White Glove Tracking project was created by Evan Roth and Ben Engebreth, with the backing of the art-and-technology groups Rhizome and Eyebeam. Web-surfing volunteers were invited to view frames of Michael Jackson's legendary performance of "Billie Jean" on a 1983 television special and pinpoint the location of Mr. Jackson's white glove.

The glove trackers tackled the job just for fun, finishing the job in 72 hours back in May thanks to a surge of traffic from Digg and other sites. The data they produced is now available online and has already been put to some highly creative uses. My favorite is this clip by Zach Lieberman, in which the "Billie Jean" video has been automatically cropped to focus obsessively on the glove. The result is something like watching "The Glove, Live on Stage, Wearing Michael Jackson." (Frames with no glove, like those at the beginning, are black.)

Originally posted on Bits by Rhizome