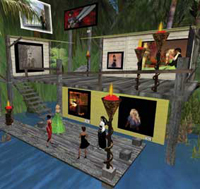 "One of the Best Places for Artists, Curators and Dealers to Meet"

With over 7m registered users, Second Life is an online virtual world complete with land, residents and a growing economy developing one of the largest art communities on the internet. The site's money-making and marketing potential to reach a new, younger audience is already being tapped by major corporations such as BMW, Adidas and Sony, which all have a presence there. Entire countries have also established virtual outposts. The Maldives was the first nation to open an embassy on Second Life's 'Diplomacy Island,' where visitors can consult an ambassador about visas, trade and other consular issues. It was quickly followed by Sweden, while online embassies for the Philippines and Macedonia are under development.

Museums, universities and non-profit-organisations are getting involved as well. In the art world, the Andy Warhol Foundation has helped fund exhibitions and projects in Second Life, such as 'Mixed Realities,' an annual juried competition set up in 2004 with Turbulence.org, a group that has supported art on the internet since 1996, to commission five new online art works.

Continue reading Art makes a scene on Second Life: The online virtual world is becoming one of the best places for artists, curators and dealers to meet, by Helen Stoilas, July 4, 2007, The Art Newspaper.