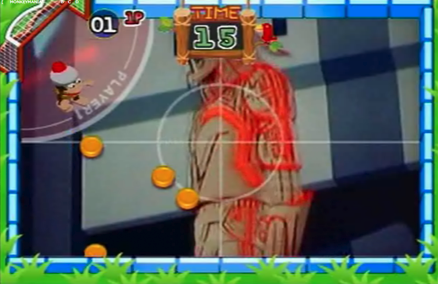 Few media artists do documentation better than JODI.org (of course depending on who you talk to, few artists do performance or new media artwork better than JODI.org), and sometime in the past few months the legendary duo of Joan Heemskerk and Dirk Paesmans uploaded a sublime example of their documentary gifts. Composite Club, an installation which was shown recently at both VertextList in Brooklyn and And/Or Gallery in Dallas, can now be viewed online as a series of video files. By using Playstation's Eye Toy camera (which maps the user's movements into the game), a few games, and some cinematic classics (and then recording the outcome), JODI has created a series of funny and characteristically disconcerting single-channel videos. The movements of Marcello Mastroianni and Sophia Loren become triggers for a workout video, characters from Tron play 'Monkey Mania,' and Harrison Ford's Blade Runner character conducts an orchestra and captains a cheerleading squad (I suppose this is much easier than hunting down replicants). Composite Club, in both its installed and online versions, gives us the ultimate in mediated experience--movies playing video games.