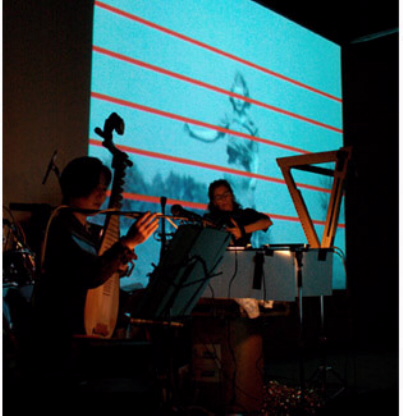 Electra, the brainchild of Lina Dzuverovic and Anne Hilde Neset, has for the past four years commissioned, exhibited, and found institutional support for contemporary art in the UK. Although they focus on the intersection of contemporary mediums, music and sonic art form the backbone of their productive efforts. Christian Marclay, Tony Oursler, and Kim Gordon are only a few of the artists they've worked with and the Her Noise curatorial project has traveled widely and been critically lauded. In celebration of the 25th anniversary of the magazine The Wire (of which Neset is now a Deputy Editor) the two are teaming up again for a series of performances, film screenings, and new commissions. Infamous performer Lydia Lunch will premiere (in the UK) her autobiographical 'Video Hysteries;' a series of short films from the LUX archives forms a history lesson on the longstanding relationship between avant garde music and film; and Christian Marclay will perform his music/video/performance piece 'Screen Play.' By bringing fully-formed exhibitions and programs to the table, Electra addresses head-on lingering institutional reticence to get involved with sound art and the simultaneous prevalence of it. Performances run throughout London from October 26th-November 22nd 2007.