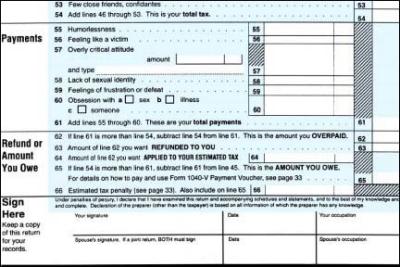 Americans, legal, illegal, and undefined alike, in the greater New York City area may want to pay close attention to the upcoming exhibition The Dotted Line at Brooklyn's Rotunda Gallery, which will open December 7th. Curated by Cabinet Magazine managing editor Colby Chamberlain, the participating artists use identification material and bureaucratic paperwork of all sorts to address what has been called the 'Security-Industrial Complex.' Many of them engage in "post-studio practices that emphasize processes and social relations." In itself the show looks engaging and intelligent, however, it is particularly urgent as the press release comes shortly after NY Governor Elliot Spitzer has proposed that New York be one of the first states to adopt Bush's Real ID act. The act was slipped through Congress in May 2005 in a 'must pass' Iraq War/Tsunami relief bill. Although each state still has to enact a costly bureaucratic machine to see it through, it will essentially turn state drivers licenses into federal IDs, and create one national identity database, thus tightening government surveillance and furthering loss of privacy. At the cost of our vanishing civil liberties, the administration's hope is to crack down on illegal immigration, and of course 'evil-doers.' This timely group show reminds us that signing the dotted line is a performative act often reaffirming insidious technologies of power.