Space Is the Place 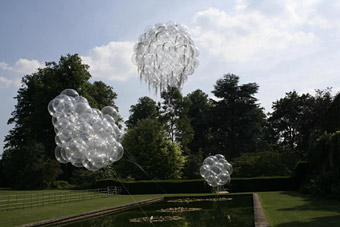 The pursuit of utopia is all too often dismissed. While finding it may be impossible, that doesn't mean the desire to do so isn't directing a great deal of our actions. Architect Tomas Saraceno is rather succinct on this manner when he says, "Utopia exists until it is created... The idea of utopia is in constant mutation and changes according to the era." Continuing the tradition of radical architecture practiced by Archigram and SuperStudio, Tomas Saraceno's projects embody utopic architectonics to fantastical degrees. Tomas Saraceno: Microscale, Macroscale, and Beyond: Large-Scale Implications of Small-Scale Experiments, open at the UC Berkeley Art Museum from this month through February 2008, is the first US museum exhibition of the Argentine-born, Germany-based visionary architect. The exhibition will feature portions of Air-Port-City, his ongoing project that envisions rhizomatic livable structures that float in the air, and subsequently are "capable of embodying more elastic and dynamic rules related to political, geographical, and cultural borders." The new social relations created in such a project are nomadic mutations not bound by traditional national and economic boundaries. Similarly, the project Flying Garden features floating structures that house species of Spanish Moss that are 'air-sufficient,' meaning that they derive their necessary nutrition from the atmosphere. As a whole, this is a poetic metaphor for very real political imperatives, namely autonomy and mobility. While many contemporary artists harbor a desire for new political space, Saraceno is actually creating that polydimensional zone of relationality.