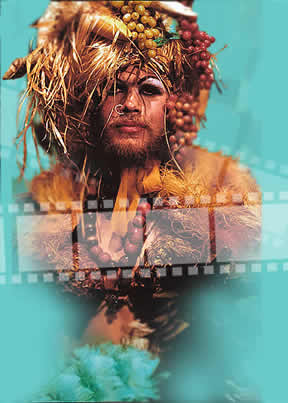 Dear Cockettes: an exhibition for and about the legendary acid queens The Cockettes just recently opened at UKS (the Young Artists Society) in Oslo, Norway. The Cockettes, who emerged from San Francisco's Haight-Ashbury community, performed "transvestite-glitter-fairie-theatre masques"--elaborate performances which even to the contemporary eye seem remarkably avant garde. "Gender fuck" is a term often associated with the group, as their signature beards, glitter, and transsexual costumes, according to Allen Ginsberg, enforced a "gay contribution to the realization that we're not a hundred percent masculine or feminine, but a mixture of hormones." The exhibition, which opened last week with a number of performances including one by London's 'House of Egypt' includes original vintage posters, photographic prints, scripts, newspaper articles, and other paraphernalia. The exhibition will include screenings of a number of rare films as well as the eponymous documentary feature by David Wiessman and Bill Webber (amazing clips and photos of which can be seen on the film's website). 'Dear Cockettes' should be seen as an important historical exhibition--one that looks beyond the usual conceptual and minimalist art history of the 1960s and 70s to cast a wider net of social relevance and cultural influence. The Cockettes can be seen not only as a precedent to glam rock era stars David Bowie and Elton John, but also contemporary performers like Devendra Banhart.