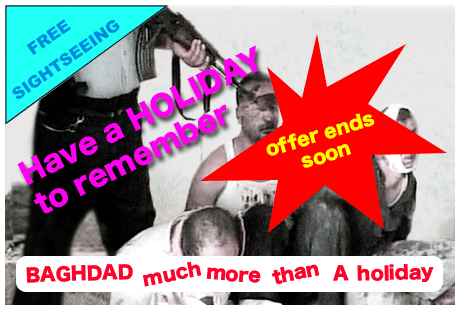 The popular Vietnam War protest slogan "Bring the War Home" has a rather knotty relationship with the current Iraq War and progressive leftist movements. Initially the slogan of the Weathermen, in our current cultural milieu it unfortunately often has the ring of mere historical rhetoric in the absence of broad political organization. Rather than bringing the 'War' home, California's nonprofit organization Montalvo Arts Center is bringing Iraqi culture home as a means to adjust the political discourse. IRAQ: REFRAME is a multidisciplinary series of events that offers many diverse points of entry and departure, both conceptually and geographically. Coupled with lectures there will be a slew or related programs, including artist Adel Abidin's Abidin Travels, recently at the Venice Biennale, that will be set up at Triple Base Gallery in San Francisco. Abidin Travels is a mock travel agency offering trips to Baghdad; "visitors make online reservations and print plane tickets while a bitterly sarcastic promotional video blends a cheerful, American-accented female voice with disturbing video footage." Illustrating how Montalvo's neighbors in Silicon Valley are profiting off the war, they have posted a page of corporations and their U.S. military contracts, not least of which is Lockhead-Martin Space System's 3.3 Billion dollar deal. When a lot of anti-war shows ultimately still amount to pretty objects in a white box, it's nice to see an organization attempting to reshape an expansive political landscape.