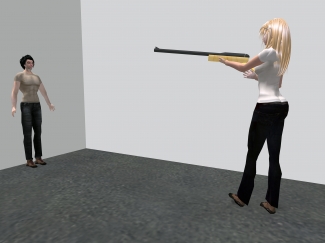 If you've ever looked for performance videos by Bruce Nauman on YouTube you know that they've all been taken down due to copyright infringement. What has taken their place, however, are copious 'versions' of Nauman's performances, enacted and filmed by fans and followers. This is emblematic of recent interest in the idea of 'reenactment,' and in particular the restaging of key performance art works from the 1960s and 70s. In both 2005 and 2007, the performance art biennial PERFORMA's programs have included more than one of these takes on the 'classics.' In 2005 Marina Abramovic restaged Vito Acconci, Joseph Beuys, Valie Export, and others in her series 'Seven Easy Pieces,' and DJ Spooky reinterpreted Nam June Paik and Charlotte Moorman's 'TV Cello.' This year, 18 Happenings in 6 Parts, Alan Kaprow's historically monumental event, is being restaged, and internet artists Eva & Franco Mattes (a.k.a. 010010110101101.org) will reenact three performances from the seventies with their avatars in Second Life. They have already restaged Chris Burden's 'Shoot,' Vito Acconci's 'Seedbed,' Valie Export's 'Tapp und Tastkino,' and the ongoing Joseph Beuys work, '7000 Oaks.' Is performance becoming more like theater, with scripts and scores to be followed by different artists in different contexts, with complex authorial attribution? And why is there such a strong impulse to reenact the past? Is this homage or simplistic repetition? Perhaps these reperformances are a viable and creative means to preserve an art form that has no material presence, and like oral histories, they can be passed down through generations of artists--giving us a rare glimpse of what came before.