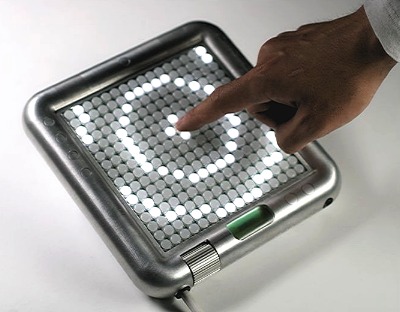 Even as digital technology has unearthed a new sonic universe of possibility for musicians, one could argue that the means and interfaces into that universe have lacked a certain old world charm. When most of us spend more than fifty percent of our lives at a computer, watching a musician stare at a laptop on stage isn't exactly thrilling. By creating a new digital musical instrument, artist Toshio Iwai has set out to change that. More interestingly, he may have actually succeeded. Manufactured by Yamaha, the TENORI-ON appears to be an organic and ergonomic fusion or sound, sight, and machinery. A handheld screen of a 16x16 grid of LED switches "any of which can be activated in a number of ways to create an evolving musical soundscape." The score mode, one of six possible modes, is essentially an X/Y axis divided by note pitch and time. The website features quicktime demo's that are as visually exciting as they are sonically, including an interview/ performance with the avant-garde's hardest working man, Jim O'Rourke (who apparently speaks Japanese). While I hate to sound like a commercial, the Tenori-On seems to be a breakthrough and makes me wish I were a spoiled rich kid at Christmas time.