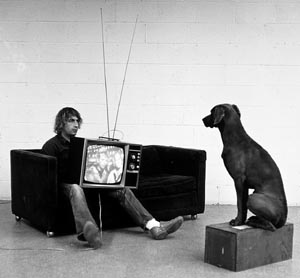 Dog watching is often one of the most amusing activities during a trip to the park, and this fall at New York City's Madison Square Park the four legged beasts aren't only frolicking in the dog run, but also on video screens set up around Danny Meyer's famed Shake Shack (another very good reason to visit said park). These dogs are the cast of William Wegman's latest video installation Around the Park. Taking on the persona of various people seen in the park--business man, tourist, and park maintenece worker--Wegman and his consummate collaborators force the viewer to observe the park and its inhabitants in a different light. Always crowd pleasers, the artist's canine-centric videos transcend their initial appearance (and constant criticism) of kitch, and consistently manage to impart a deeper sense of human frailty and humor. For thirty years Wegman and his Weimaraners (who always play the straight man) have created unique videos that sit along side the work of Bruce Nauman and John Baldessari, conceptually and visually (early works by Wegman as well as Nauman and Baldessari are available through EAI). Running concurrently at Senior & Shopmaker Gallery on Madison Square Park is 'Wegman Outdoors', an exhibition of the artist's landscape photographs (which coincidently also include the dogs) dating from 1981 through 2007.