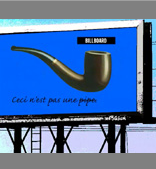 Almost as long as LCD panels have allowed advertisers to cover building facades, public transportation, and just about any other urban surface with moving images, artists have appropriated the ubiquitous technology to their own aesthetic and critical ends, inserting their work into the flow of advertising information on city streets. 'Urban Screens Manchester,' a four-day conference and screening series in the English city from October 11th-14th, examines the history and potential of these interventions with talks by noted architects, urbanists, and media theorists, along with a group of projects screening on Manchester's public screens. Some of the most ambitiously scaled have been produced in affiliation with Trampoline Platform for New Media Art, an organization based in the UK's East Midlands region that promotes an international program of media work. In conjunction with the Manchester conference, it is presenting 'Do Billboards Dream of Electric Screens,' several mostly large-scale works screening in the streets, including projects by Miles Chalcraft, George Drivas, and Corine Stübi that comment on the formation of social aggregates in public spaces, as well as work by Suzanne Moxhay, Frank Abbott, and Martha Gorzycki that take a formal look at the construction of place. - William Hanley