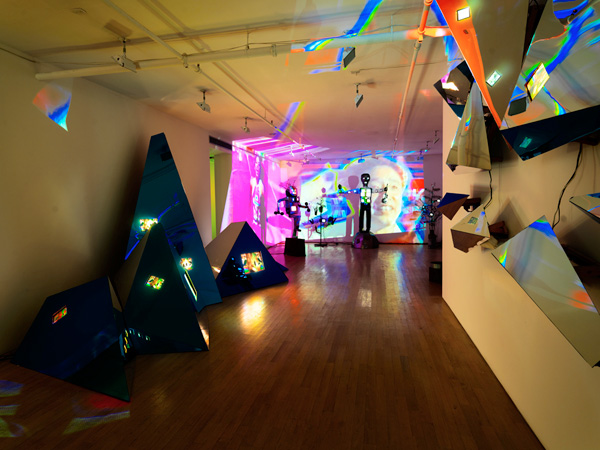 "Behind every great man..." is perhaps a phrase more identified with 1970s feminism than the current state of gender relations, but in an art world which appears to offer greater opportunity to the male sex (for example see Jerry Saltz's illuminating Village Voice article), perhaps this axiom is still more a reality than a tired cliche. Such is the case of Shikego Kubota, artist and wife of the late Nam June Paik whose current show at Maya Stendhal Gallery, in New York City, at long last celebrates her own illustrious career. Perhaps best known for her iconic feminist work 'Vagina Painting' (1965), Kubota was a major player in the international Fluxus movement and an early adopter of video. Generating and distorting video signals and creating video sculpture (techniques so supremely associated with Paik), Kubota's works explore links between the technological, the personal, and the natural. The humorous and extremely moving exhibition My Life with Nam June Paik (which closes on October 20th), is an homage not only to her life partner who passed away in 2006 but also a remarkable display of her own artistic gifts. Showing both older video sculptures and two new sculptural portraits of her late husband, the title of this exhibition brings to light some highly nuanced issues of gender, collaboration and influence, and recognition.