My Body, My Discotheque 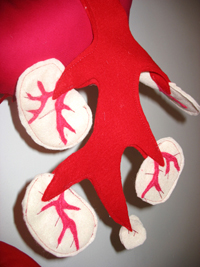 Rather than fighting space station supercomputers, 2001 was the year to dance to the sounds of our own organic bodies. Between 'A Chance to Cut is a Chance to Cure' and 'Bodily Functions,' micro-samplers Matmos and Matthew Herbert respectively made excellent dance records that year that used the body as their source material. Taking this method one step further, Sonic Body is an audio-installation using "interactive technology to create an orchestra of the human body." Opening November 1st in conjunction with the Brighton Digital Festival in the UK, the installation is inspired by the scientific tradition of listening to the body as a means to diagnose illness. Upon entering an amorphous pod, the audience triggers sensors that play a myriad of painstakingly recorded audio from within the human body. The sounds and techniques deployed to capture them are the most exciting aspect of the project. Three interdisciplinary artists, in consultation with a heart surgeon, used tools ranging from stethoscopes to waterproof contact microphones to record sounds such as a rainforest-esque intestine and detuned ultrasonic frequencies that resemble ambient wind chimes. An anechoic chamber, essentially a highly soundproofed space with no reverb, was used to document the external sounds of hair. The looped results posted on the project's website are addictively danceable mutations of minimal techno. As science looks ever outward, it seems culturally significant that such alien music would transmit from the internal network of our very bodies.