The Mobile Handbag of the Future 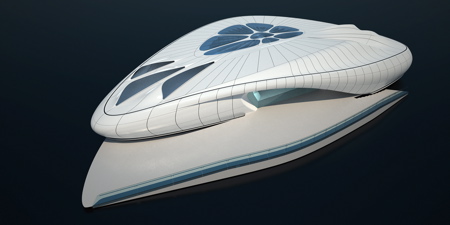 While hover cars and teleportation devices are still tragically nowhere near coming to fruition, 2008 will give the world's most populated metropolises the first haute couture Mobile Art Container designed by a Starchitect. A collaboration between Chanel artistic director Karl Lagerfeld and Pritzker Prize-winning architect Zaha Hadid, the Mobile Art Container is a traveling pavilion that will premiere in Hong Kong before traveling for two years to locales such as Los Angeles, New York, Paris, Tokyo, Moscow, and London. Lagerfeld asked 20 artists to create works for the container that take the iconic quilted Chanel handbag, created by Coco Chanel in 1955, as their inspiration. The structure, itself not unlike a Chanel handbag, displays the usual Hadidian innovation and architectural fabulation. A continuously arching design, the pavilion breaks down into seven-foot-wide pieces that transport easily. While the two larger than life personalities behind the project take a great deal of the attention, the impressive artists included are Yoko Ono, Lee Bul, Stephen Shore, Wim Delvoye, and Sophie Calle to name but a few. Comparatively, the Koolhaas-Prada communion seems rather quaint.