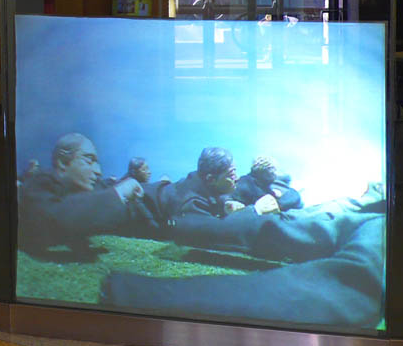 Condensation, distillation, and repetition are just some of temporal strategies that the 11 artists in the small but striking show of video work Digital Political Time Lapse at the Brooklyn campus of Long Island University employ to represent the last few years in global media history. Understandably, the United States' war in Iraq as well as the paranoid catastrophe of recent homefront politics looms large for many of them. Inside the fishtank-like gallery in the lobby of the university's Kumble Theater, William Stone's 2004 work 'Plural Nounsss' edits one of George Bush's State of the Union address down to a series of elemental words, such as "benefits," "terrorism," and "firefighters," while Adam Simon presents a 'Video Portrait' from 2002 of photographer Moyra Davey softly decrying the post-September 11th directive to go shopping in the name of safety, and Aunrico Gatson presents a single-channel video slpit into a three-monitor, machine gun-paced slideshow of war images culled from the Internet. But in addition to time-based ruminations on war and security, several works, such as Jillian Mcdonald's animation derived from Webcam footage of the 2006 bloom of a "corpse flower" at Brooklyn's own botanic gardens, veer into the many different Web-enabled images that have found their way into the political melange. Among them are several that insert the personal into the news-driven mix. Marcin Ramocki, for example, creates pixilated portraits, using the composition tool of an ancient Macintosh sound-editing application, that create a spazz-core cacophony when played. The exhibition comes full circle when, on a table opposite the entrance, a surveillance camera and attached monitor capture video of visitors, who can then rewind from their own real-time moment all the way back to the exhibition opening to watch others encounter themselves on screen.