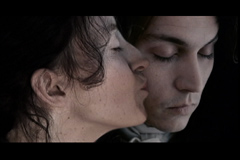 Jillian McDonald has garnered much attention over the past few years from her web project Me and Billy Bob, in which she imposes herself both physically and emotionally into the film and life of Angelina's pre-Brad paramour, Billy Bob Thorton. If you don't relate to her attraction to Mr. Thorton then perhaps her hilarious and thought-provoking video, Screen Kiss, which has her making out with numerous other celebrities who may be more to your taste. (Another video, To Vincent with Love, has her in the bathtub with Vincent Gallo--she seems to have a type!) Using the web, installation, video, and photography, McDonald illustrates a clear fascination with the Hollywood cinema. However, her work is distinct from many other artists also concerned with the cinematic. Not simply interested in issues of narrative, time, space, or the like, McDonald looks specifically at the genres romance and horror and how these constructions become a part of our own experiences. And by placing herself directly in the frame she successfully taps into our collective pop cultural daydreams and anxieties. Jillian McDonald's solo show at New York's Moti Hasson Gallery opens on October 11th.