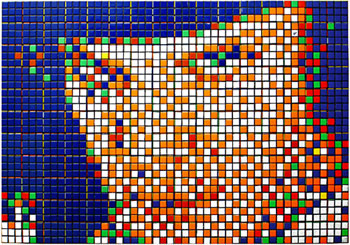 Graffiti and Internet art are often cited together as outcasts from the commercial art world, although one seems to have made the jump more swiftly than the other (you guess which one). London's Lazarides Gallery is the latest venue to take on artists that, according to their website, 'established galleries used to ignore.' Only slightly undercutting their underdog status (besides the long tradition of selling graffiti art in a gallery context) is the fact that works by Banksy (who is in the gallery's stable) are now going for well over US$200,000. Commercial successes aside, the latest 'cult' (Lazarides uses the term 'cult' as opposed to 'graffiti' or 'graphic') figure to enter the gallery world is French artist Space Invader. His tags (which can be seen in over 35 cities around the world) are small tiled mosaics perfectly emulating the iconic invaders of his name. For his Lazarides show Space Invader expands his mosaics beyond the simple game characters of his street work (which are documented in the show by a series of photographs) to create a series called 'BAD MEN PART II" which depicts stills from iconic films such as Scarface and Clockwork Orange through the use of another 80s icon-