In Life as in Warcraft 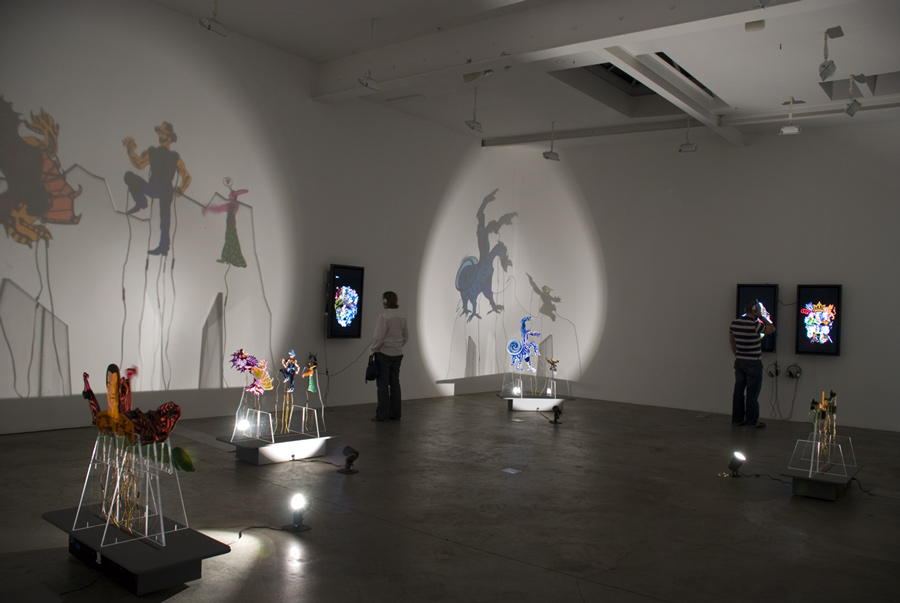 Los Angeles-based artist Eddo Stern--who famously logged 2000 hours playing World of Warcraft for one of his projects--has found more than a parallel virtual community in massively multiplayer online roleplaying games like WoW. Drawing on fantasy's ability to lay bare the ambitions and anxieties of everyday life, his most recent body of work uses elements taken from games such as Everquest and Warcraft to examine the overlap between desires and social relationships expressed in the online world and those of our own. The artist's solo exhibition at New York's Postmasters gallery through October 13th charts notable points at which these two universes illuminate and influence one another. The kinetic sculpture Man, Woman, Dragon draws on the visual tropes of Warcraft to distill the fabrication of masculinity online into three simple poles that parody the real-world systems of desire from which they emerge. Other pieces such as Best Flame War Ever (King of Bards vs. Squire Rex, June 2004) and Level sounds like Devil (BabyInChrist vs. His Father, May 2006) document actual exchanges in online communities that betray the participants' earnest and impassioned concerns, which have been shaped equally by the logic of gaming and life outside. An entire gallery is given over to a projected series of found 3D animations that show tunnels, wormholes, voids, and other fantasies of transcendence drawn from computer games. Every work uses a similar and more-often-than-not humorous mix of visual style and documentary material to articulate moments of overlap between roleplaying and real life, deftly latching on to what it is that captivates about online gaming.