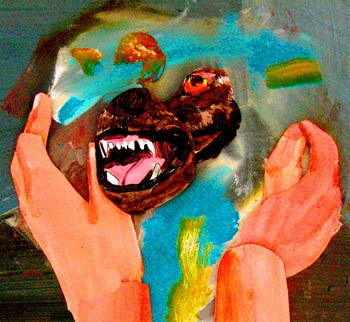 The latest in Dia Art Foundation's series of web-based Artists' Projects, Ezra Johnson's Wrestling with the Blob Beast (2008) comprises sixteen screensavers made using his uncommon method of animation. Johnson builds his work by painting and repainting canvases with a loose, gestural flair, producing densely textured sequences that somehow also manage to feel buoyant. What Visions Burn (2006), Johnson's acclaimed, twenty-two minute opus, adopts the language of a heist flick to recount the theft of paintings from a museum, producing a reflexivity between the artist's production process and the trajectory of the story itself. Johnson's current crop of screensavers forgoes such explicit narrative, yet offers sixteen vignettes that collectively continue the artist's meditation on his process. Screensaver Wrestling the Blue Blob (2008) is the most apparent example of this, depicting an unruly mass of blue and red brushstrokes in the corner of a room, which sprouts canine fangs and menacing eyes each time a pair of hands attempts to grasp it. A similar story unfolds in Shapes Shifter (2008): a transmogrifying, geometric form wavers between representational and abstract states, as if staging the artist's own anxieties about painting's historically separate practices. By bringing his animations into the realm of the screensaver, Johnson challenges the cinematic conditions through which his work has been previously viewed. As Sara Tucker notes, in her introduction to the project, "The screensaver is a paradoxical medium, present when the computer isn't in active use, so presumably not the object of one's focus, yet often running at such lengths that its image becomes indelibly etched in one's visual memory." Slow, indirect absorption may provide the perfect route for viewers to explore the questions and themes lying beneath Johnson's tactile sequences. - Tyler Coburn