Mixing It Up at Eyebeam's MIXER

In New York or any other busy urban nexus, it's all too easy to submit to the tyranny of rushing from one destination to another. How much more pleasant -- and artistically fruitful -- it can be to drift through one's environment, sampling its many sensory experiences at leisure. Last Saturday, at Manhattan's Eyebeam, a new media art party called MIXER offered many delights, from cerebral to bawdy, for those who took the time to explore and savor them. First launched in November last year, MIXER is the art-and-technology center's quarterly event featuring performances by acclaimed video and audio artists, as well as interactive installations inviting creative play by the attendees.

One highlight on Saturday was London-based VJ group D-Fuse's performance of "Latitude", an ambient cinematic exploration of everyday life in the rapidly developing Chinese cities of Shanghai, Guangzhou, and Chongqing. Inspired by the Situationists' notion of "la dérive" (drifting through cities in response to their emotional impacts), the piece wanders among all sorts of urban tableaux, from the mundane and intimate to the grandiose. Fragments of conversations, shots of crowds, and architectural forms such as the vein-like loops of a Shanghai overpass combine to create an evocative portrait of cities in growth.

In one stunning opening clip, we see a girl emerging onto her apartment balcony -- then the camera slowly (and vertiginously) pulls back in midair, gradually revealing the immense grids of her high-rise and the construction sites that make up her neighborhood. In another shot, kids perform a dance routine on a dull green field, their sheer numbers and the vivid blue-and-white colors of their uniforms forming a kaleidoscopic pop of energy. While many scenes of street life and urban architecture might recall U.S. cities, other footage is suffused with a sense of history: A shot of a golden eagle statue glimmering on a Chongqing bridge overlooking a lush green canyon is as picturesque as an ancient Chinese landscape painting. D-Fuse shot the video footage, much of it in HD, during several visits to China a few years ago. Some high-res panoramic footage involved using 475 cameras shooting from all sides, giving a wealth of angles to choose from, D-Fuse member Matthias Kispert said in an interview. The sounds of the cities provided fodder for the soundscapes that accompany the video, and in fact, some audio even came from a cheap handheld recorder that registered the electromagnetic radiation from streetlights and subway systems, Kispert added.

Other performers included Bubblyfish, who showed off her formidable skills in crafting electronic tunes using a Game Boy; alas, the accompanying visuals by video artist CHiKA seemed sluggish and uninspired by comparison. Visuals by Lady Firefly and music by DJ Spinoza also suffered by comparison with D-Fuse's hypnotic show, but fortunately, MIXER offered abundant opportunities for ambling about Eyebeam's cavernous space and checking out some interactive installations during the performances' less-than-compelling moments.In one corner, partygoers queued up to try their hand at some instant animation, using Eyebeam R & D Fellow Zach Lieberman's Drawn. In front of a crowd of onlookers, each participant created a quick sketch using paper and ink, then digitally captured the results. With a wave of the hand, the user could then send each element of the drawing gliding about on a projection screen, as if the artist were a conductor directing a symphony. Lieberman created the installation's software using his own openFrameworks, an open-source C++ library (currently in prerelease) that's comparable to Processing, he explained. For tracking the motions of people's hands and fingertip, he used Intel's Open Source Computer Vision. 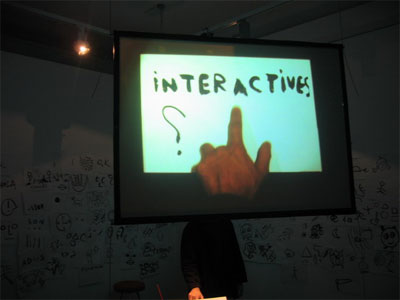 Originally a tool for his own performance, he converted Drawn into an installation when he noticed how eager audience members were to try it out themselves. Sometimes the results are unexpected -- he laughingly recalled a moment at the File festival in São Paolo when a drawing of a giant vagina suddenly appeared onscreen -- but at least the ever-creative results keep him on his toes. Some of the forms that appeared on Eyebeam's screen also veered toward the crude or ridiculous, but others were rather sublime, such as an abstract drawing that evoked the curves of a dancer, surrounded by radiating lines that shimmied in the moment of animation.

Nearby, others gathered in front of a mock VIP lounge complete with a velvet rope and red carpet, waiting to enter for their photo op. Titled Anywhere But HERE!, the installation by Eyebeam Senior Fellow Jeff Crouse and Production Fellow David Jimison invited participants to be photographed in front of a projected backdrop such as a Hawaiian sunset, a nightclub, an attic bedroom, or a prom dance floor. Once they chose their backdrop and were allowed inside, the partygoers let their cheekiest urges run wide, with the help of costumes and props. After each photo was taken, people used nearby terminals to email them to friends or upload them to sites such as Flickr, Picasa, and Facebook. 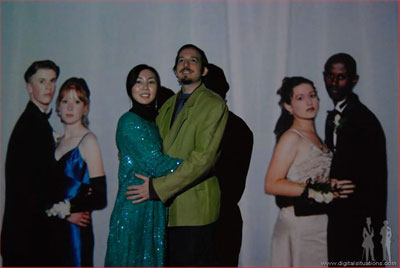 With the popularity of Last Night's Party and similar sites, "the party photo has become this sort of social currency," Jimison remarked. "This is a playful critique." The title Anywhere But HERE! refers to how an obsession with picture-taking can lead to alienation from the actual party at hand, he explained. Whether or not all the photo-happy (and often soused) participants caught the irony is open question, but it's an idea with promise. The version at Eyebeam was merely a prototype, Crouse said; if you missed it, not to worry, for he and Jimison plan to create a mobile version. Anywhere But HERE! may soon be coming to a party near you. - Lisa Delgado