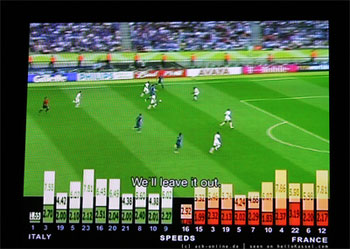 Similar to photography, the 19th century invention of photogammetry was used to discern empirical truths (measurements, altitudes, etc) about objects. Given his interest in the elusive relationship between observation and knowledge, it is no surprise that prolific German artist Harun Farocki would take photogammetry as an entry point for one of his most well-known films Images of the World and The Inscription of War (1989), which explores the military's use of imaging technologies during World War II. One particularly compelling narrative in the film points to how Allied analysts, while studying aerial photographs of Nazi Germany for munitions and factories locations, failed to locate the concentration camp in Auschwitz. Farocki's most recent work, the 12-channel video installation Deep Play (2007) calls upon a range of media forms to dismantle the elaborate spectacle of televised sport- specifically the 2006 World Cup Finals between France and Italy. The piece plays with our anticipation of the "big event" of the game which was, of course, not matchpoint but rather Zinedine Zidane's infamous head butt of Guiseppe Materazzi. The installation juxtaposes numerous views of this memorable game including live feed footage of the game, 3D models of the players, statistical analysis of players' speed and positions, surveillance feeds from inside and outside Berlin's Olympic Stadium and images of the editors and analysts responsible for collating the multiple streams into a single broadcast. Deep Play asks how these multiple points of view offer a nuanced entry into the event and how our expectations can blind us to all other elements of the game. Like Farocki's other works, Deep Play elegantly leads us to a deeper understanding of the mechanisms and assumptions that underlie the way we see and how this leads to our understanding of the world. The show is up at Greene Naftali Gallery in New York City until February 9th, and will also be seen at the Northern Gallery for Contemporary Art in Sunderland, UK as part of the upcoming AV Festival. - Caitlin Jones