Review of Olafur Eliasson's "Take Your Time" at the Museum of Modern Art and P.S.1

Olafur Eliasson's expansive mid-career survey "Take Your Time" claims a significant amount of space at both the Museum of Modern Art and P.S.1, giving reason for museum goers to follow its title's injunction. The Klaus Biesenbach and Roxana Marcoci-curated show comes to New York on the heels of a smaller manifestation at San Francisco Museum of Modern Art, continuing a dramatic stateside splash for the Danish-Icelandic artist-- which will be literalized later this summer with four waterfalls he's planned for the downtown harbor area. Those who want to experience the diversity of the crowd-pleasing artist's output should make time for all the components of this wide-ranging show. 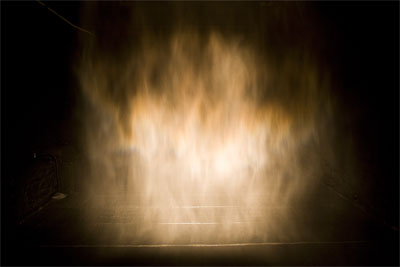 The works present trace Eliasson's rise to prominence since the 1990s. His earlier pieces-- he prefers "apparatuses" or "experimental setups" -- typically stage modest interventions within our perceptual assumptions, and are frequently disarming in their economy. Beauty (1993) is especially mesmerizing, consisting of an iridescent curtain of mist in P.S.1's dark basement vault, produced simply by refracting light off of water droplets sprayed from a suspended rubber tube. The capacity for this approach to work at a vastly magnified level was apparent with The weather project, his spectacular and now iconic 2003 installation of light, smoke, and mirrors for the Tate Modern. One could compare Wannabe (1991) with Ventilator (1997) in order to gain a sense of this ambition of scale: the former is a single low-hanging spotlight tucked into a side chamber at P.S.1, designating an intimate platform for training viewers to command institutional space; the latter, a free-hanging industrial fan that pendulously sways through MoMA's immense atrium, erratically animates the imposing room. It's a playful subversion, particularly when considered against the solemn container's previous treasures (Waterlilies, Broken Obelisk). 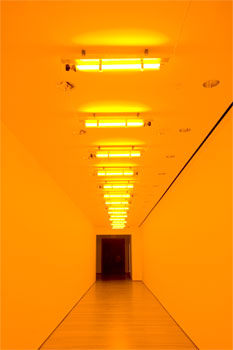 Olafur Eliasson, Room for one color, 1997. Photograph by Matthew Septimus. Courtesy of MoMA and P.S.1.

His aim throughout the show appears to be one of gentle but productive disorientation. A large segment of MoMA is vividly transformed by Room for one color (1997), a long conduit connecting the third floor escalators to the special exhibition galleries, lit by a series of monofrequency yellow light bulbs. The surreal and potentially off-putting acidic pall that defines one's experience of the space (and its occupants) casts the distant sources of natural lighting, visible at either end of the tunnel, in an ultraviolet glow and points to the instability of color perception in the human eye. It also reveals the acuity of line and form granted when the color spectrum is all but eliminated. 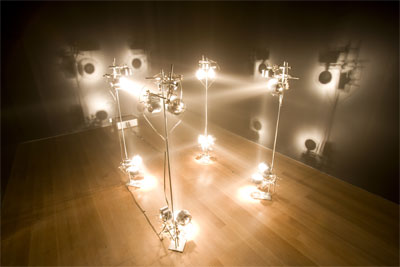 Eliasson's installations pick up on one legacy of the minimalist project of the 1960s by claiming to work "on" our subjective perception with full transparency. 1m3 light (1999), packed among the cluster of small chambers at the far end of the tunnel, demonstrates how to dematerialize a cube: define its volume with twenty-four lights projected through a smoky chamber at 90-degree angles. Nearby in another darkened room, Your strange certainty still kept (1996) presents a spellbinding curtain of falling water droplets that seem suspended, or even ascending, while under the play of a flickering strobe light. The cords and machinery are laid bare as elsewhere, revealing the illusion or "trick," thus cordially inviting reflection on the operations (and fallibility) of perceptual processes. Early prototypes and mock-ups of some of Eliasson's team-produced studio works are likewise on view in P.S.1's Model room (2003), where the debt to Buckminster Fuller's nature-derived geometries is apparent.

Though Eliasson's work often employs projected light, it's not James Turrell as much as Robert Irwin who functions as a major influence. Eliasson resuscitates Irwin's practice of delicately adjusting bare sites in order to coerce visitors into awareness of their own nuanced phenomenological relationship to the act of seeing itself. Yet there is an odd tension between the museum rhetoric enjoining both "active participation" and "seeing yourself see," perhaps not dissimilar from the liberating sense of perceptual immediacy that "Light and Space" art proposed through mediation.

Olafur Eliasson, I only see things when they move, 2004. Photograph by Matthew Septimus. Courtesy of MoMA and P.S.1.

Alas, "seeing yourself see" may have less potential in this context than an acute awareness of others perceiving. The perceptive bodies present in the same confined spaces make the show largely about an imposed togetherness. It takes a concerted effort to extract the hoped-for conceptual nuggets from many of the pieces and one's experience, particularly at MoMA, is likely to be dominated by "seeing others taking camera phone pics." Eliasson's work sits at the confluence of fine art, design, and architecture, and much of the show also succeeds as a rainbow-colored stage set for touristic awe and technological self-fashioning. One of MoMA's third floor architecture galleries is entirely taken over by rotating panes of colored glass surrounding a central lamp, titled I only see things when they move (2004); the shifting bands of color thrown across the walls transform one's silhouette into the semblance of a 70s funk album cover. (If there isn't room to see your own, search Flickr.) In moments like this, Eliasson clearly falls in line with artists like Jeppe Hein and Carsten H�ller, whose "psychedelic amusement park" aesthetic was epitomized in LA MoCA's 2005 group show, "Ecstasy." The massive rotating mirror swaying from P.S.1's third floor ceiling would have fit that context: Take your time (2008), sharing its name with this exhibit, rewards extended attention (preferably from a horizontal viewing position) with the proposal that it's a stationary surface that reflects a wobbling world below, not the reverse. 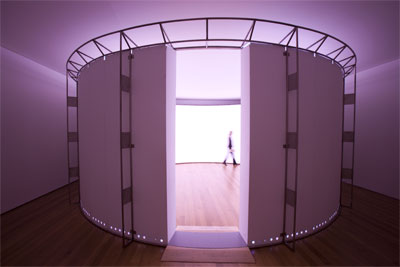 Olafur Eliasson, 360� room for all colors, 2002. Photograph by Matthew Septimus. Courtesy of MoMA and P.S.1.

When passing from Eliasson's early barebones contraptions to the spectacularly immersive recent works, it becomes clear that the humble moments of self-reflexivity that the former aspire to cannot withstand the pleasures of mediated euphoria in the latter. A sense of collective rapture presides over the crowds gathered within MoMA's 360� room for all colors (2002) as they anticipate the almost tactile passage from one intensity of hue to the next. Notably, the mechanism of computer-controlled lights remains hidden, encouraging a response of pure affect. And a similar opacity of display marks The natural light setup (2008), with its bare room illuminated by a glowing ceiling-wide panel of subtly shifting hues of white; here the comparative breathing room of P.S.1 invites another sort of absorption. The occasion to give in to artificial light and emptiness feels valuable here, yielding rich associations from past experience of cloud-swept skies and elusive sun--a rare moment of introspection amidst a romance of technology.

Rafael Tiffany is an independent writer and critic based in Brooklyn, NY. He holds an M.A. in Humanities and Social Thought from New York University's Draper Program.
distortion green immersive installation process
Previous Post Next Post
Reply to this Post
You must be logged in to post a comment. Log In
Advertise on Rhizome with Nectar Ads
Rhizome News
Our weekly email newsletter including featured stories, events, job listings, announcements and opportunities in the fields of art & technology.
Follow @rhizome Subscribe to Rhizome's YouTube Channel Rhizome RSS
Featured Articles