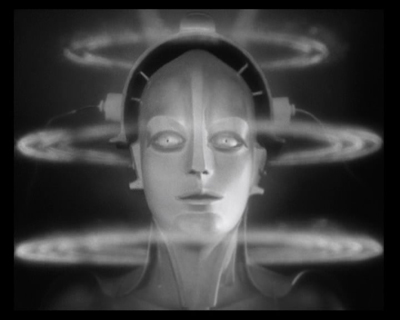 The Maryland Institute College of Art (MICA) is home to a very interesting set of new media artists--both faculty and students--and exhibitions like "sight.sound [interaction] 2.0" are securing the space as a breeding ground for new ideas. An annual exhibition curated by Jason Sloan and open through March 14, the show brings together local and international artists whose work--much as the title implies--explores audio/visual interactivity. "sight.sound" doesn't aspire to a much tighter curatorial theme than that, but this allows viewers to create associations of their own, ranging from labor commentary to the aesthetics of experimentation. For instance, Nashville-based collaborators [Fladry+Jones] and DJ Black Noise meditate on collage theory, as it has shifted from the era of expressionist film to the present, by offering a 30-minute remix of Fritz Lang's film, Metropolis. The original film comments on the relationship between workers and the ruling class in an increasingly mechanized society, and the artists' remix offers a contemporary take on this evolving narrative. Baltimore-based artist Colin Ford conducts an experiment in color psychology, asking visitors to identify the hues that represent business brands, such as "Starbucks Green" and "Verizon Red," and each subsequent visitor's selection is averaged with their predecessor's, which Ford believes turns corporate power on its head by allowing consumers to " alter the meaning that the brand holds." Local artists Dan Huyberts and Will Rosenthal bring play into the fold with their fun projects. Huyberts's Circuit Bent Video Sculpture Aural Vision 1 allows viewers to "watch" nature recordings on a television, using a photocell that triggers the screaming of a circuit-bent smoke detector. Rosenthal's Cideslide is an interactive video game inviting users to choose their own adventure in navigating what Rosenthal describes as a surreal "Lynchian" world by using a computer's arrow keys, and to enter into dialogue with the game's characters via chat boxes. Also included are Paul Slocum's Dot Matrix Synth, CJ Yeh's software-based composition, mybirthday=myphilipglass, and Carlo Zanni's Ebay landscape, among other projects. - Marisa Olson