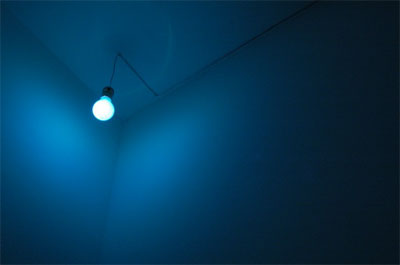 The overlaps and incongruities between visual and aural engagement are the focus of "Finding Pictures in Search of Sounds," sound artist Stephen Vitiello's second solo exhibition with Museum 52, in London. For Boxed Gray (2008), Vitiello has applied a thick coat of silver paint to the walls of the gallery's front room and immersed it with a rapidly paced soundtrack of field recordings and electronics. Subtle Blue Gray (2008), in the back room, forms a conversational counterpoint: three blue lightbulbs flicker and pulse, enveloping the space in nocturnal hues, as four speakers embedded in the gallery walls generate faint, scratching sounds. Collectively, the two works find Vitiello continuing to develop visual analogues to his sound pieces, an inquiry that previously included him mining the sculptural properties of speakers and making graphite, ink and pigment drawings from LFO speaker vibrations. For "Night Chatter", his 2006 show with Museum 52, Vitiello even interwove Virginian ivy with speakers playing a recording of a conversation between Tony Blair and George Bush, processed to a point where the politicians' voices sounded like electronic bells (Hedera B,B,B (2006)). Considering Virginia's military significance for the United States government, Vitiello's piece had the strange effect of turning an element of the state's natural bounty into an agent for the cause: a position from which to surveille. In contrast, Boxed Gray and Blue Gray number among Vitiello's more abstract experiments, forgoing explicit critique for diffuser modes of engagement. Yet by focusing on the expressive and meditative registers of aesthetic experience, Vitiello's sophisticated understanding of the conditions of reception comes to the fore. - Tyler Coburn