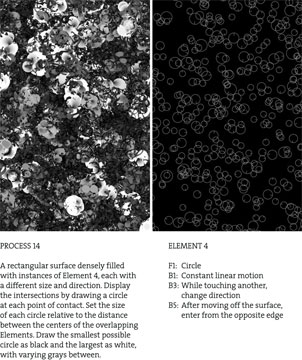 The process behind generative art often holds as much fascination as the final product, as software artist C.E.B. Reas seems well aware, judging from his latest exhibition at Manhattan gallery Bitforms. Aptly titled "process / form," the show offers an unusually multifaceted glimpse into the methodology of the artist, who is well-known for co-creating the programming language Processing and for using code to mimic natural forms and behaviors in his own works. On display are software installations, prints, and relief sculptures created using Process 14 and Process 18, two new systems in Reas' "Process" series, first begun in 2005. At Bitforms, the software installations feature a clever set-up: side-by-side screens let viewers see two interpretations of each process unfurl. The right hand screen of Process 18 (2008) offers up a minimalist-inspired display, where simple white lines rapidly dart and cluster across a black background. In contrast, the neighboring screen offers a more lush, painterly vision: The same motion plays out there, but the lines' movements leave soft strokes of white, gray, and black, creating forms reminiscent of feathers or splinters. Similarly for Process 14 (2008) --- based on the form of a circle -- the right-hand screen shows stark round forms drifting and repelling one another like solitary amoebas, while on the display to the left, the circles leave gentle swirls like a field of blossoms. While such works defy materiality, Reas created the show's prints and relief sculptures to bring Process 14 and Process 18 into tactile form, he said in an interview at last night's exhibition opening. Especially intriguing are the two fiber-composite sculptures of Process 18-generated images, created using a milling machine. Matter-of-factly titled P18 (Object 1) (2008) and P18 (Object 2) (2008), the sculptures translate grayscale values into three dimensions, forming rocky-looking ridges suggesting a topographic landscape. One could imagine such an appealingly stony texture used in a larger, perhaps even architectural scale to let walls or floors mimic the texture of cliffs. Bringing further insight into his work and ideas, the LA-based artist will give a talk at the Pratt Manhattan Gallery tonight at 6:00 p.m., where he has a piece in the show "Impermanent Markings." - Lisa Delgado