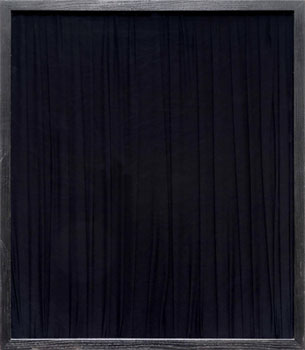 Loss, reduction, vacancy and dissolution: all topical buzzwords the New York art world has come to expect from the emergent generation of European artists. After the Vincent Honoré-curated "From a Distance," at Wallspace in 2007, and artist Matt Saunders' group enterprise, Out Riding Fast, this past winter at Harris Lieberman -- both of which tipped the scales towards the Old World -- Foxy Production's current exhibition of seven continental practitioners feels a bit superfluous. Curated by English artist Dick Evans, "Nul" muddles through the post-historical morass, with many of its participants masquerading vintage modes of object- and image-making to little effect. Anders Clausen builds wooden pedestals and sculptural busts, in the fashion of Jacob Epstein, that lack the verve and ingenuity of similar works by contemporaries Steve Claydon and Matthew Monahan. Salvatore Arancio's photo-etchings rehash the type of psychically-fraught Gothic imagery that made its rounds on the market a few years past. More promising is the work of Lars Laumann (here only partially represented by a screen-print, entitled Hatful of Cocteau, of a posthumous article on Jean Cocteau), whose videos about Morrissey, Princess Diana and Eija Riitta Berliner-Mauer drew buzz at White Columns, in 2007, and most recently at this year's Berlin Biennial. Simone Gilges' installation also excites, with its oblique mix of photography and sculpture. Attempting to draw connections between her hanging curtain, framed piece of black silk and ornately framed photograph of a cupid statuette makes for the most interesting -- and irresolvable -- experience in the show. - Tyler Coburn