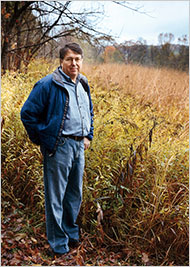 This past Sunday the New York Times Magazine profiled Lewis Hyde, a writer and poet whose 1983 book The Gift described the value of art and literature in a market system as "the commerce of the creative spirit." Now a fellow Harvard's Berkman Center for Internet and Society, Hyde is at work on a book that attempts to define how the market of cultural property should be regulated. Excerpts below, see link at the bottom for the full article.

In the late 1990s, Hyde began extending his lifelong project of examining "the public life of the imagination" into what had become newly topical territory: the "cultural commons." The advent of Internet file-sharing services like Napster and Gnutella sparked urgent debates over how to strike a balance between public and private claims to creative work. For more than a decade, the so-called Copy Left -- a diverse group of lawyers, activists, artists and intellectuals -- has argued that new digital technologies are responsible for an unprecedented wave of innovation and that excessive legal restrictions should not be placed on, say, music remixes, image mashups or "read-write" sites like Wikipedia, where users create their own content. The Copy Left, or the "free culture movement," as it is sometimes known, has articulated this position in part by drawing on the tradition of the medieval agricultural commons, the collective right of villagers, vassals and serfs -- "commoners" -- to make use of a plot of land. This analogy is also central to Hyde's book in progress, which looks closely at how the tradition of the commons was transformed once it was brought from Europe to America.

Hyde posits that the history of the commons and of the creative self are, in fact, twin histories. "The citizen called into being by a republic of freehold farms," he writes, "is close cousin to the writer who built himself that cabin at Walden Pond. But along with such mainstream icons goes a shadow tradition, the one that made Jefferson skeptical of patents, the one that made even Thoreau argue late in life that every 'town should have ... a primitive forest ..., where a stick should never be cut for fuel, a common possession forever,' the one that led the framers of the Constitution to balance 'exclusive right' with 'limited times.' It is a tradition worth recovering."