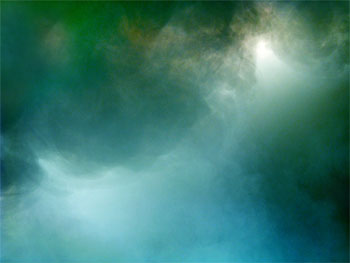 Running through the end of December, "ZEE[RANGE]," at Pittsburgh's Wood Street Galleries, furthers Kurt Hentschlager's inquiry into the facets and limits of multi-sensory perception. The Austrian artist describes the exhibition's central work, ZEE (2008), as a "mind-scape" composed of artificial fog, stroboscopic light and adaptive surround sound. These elements conspire to efface the traditional contours of the exhibition space, replacing them with "a psychedelic architecture of pure light." An accompanying piece, RANGE (2008), makes its world premiere in this exhibition. Building upon Hentschlager's past work with 3D video game software, such as KARMA / cell (2006), RANGE presents a collection of virtual characters, contained in a small space, dividing from and agglutinating into a larger mass. Taken together, Hentschlager's latest works recall FEED (2005-6), a multi-tiered performance, created for the Theater Biennial Venice, first featuring a projection of suspended, virtual characters, followed by "a composition for artificial fog, pulse- and stroboscopic light." These seemingly unrelated modes of production thus work together, staging a condition of unreality characteristic of contemporary life and then immersing the audience in an affective simulation of this condition. But if Hentschlager's uniform, virtual mass betrays a nihilistic take on society, the subsequent dissolution of the audience into a phenomenal field may also suggest other forms of self- and collective constitution to still be possible. - Tyler Coburn