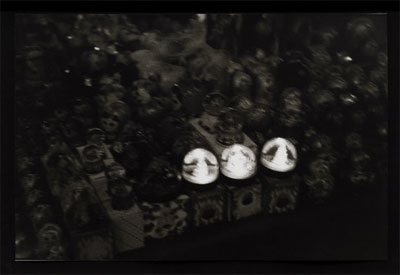 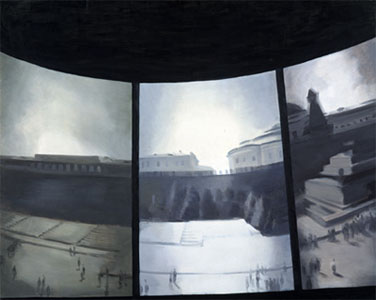 Olga Chernysheva usually looks for material in her neighborhood, and at the VDNKh, just a few kilometers north along a major Moscow thoroughfare, which has provided her with inspiration on many occasions. The park's mixed roles -- as a place of business, an amusement park, a relic of Stalin's imperial vision -- make it rich in the quirks and dissonances that her work thrives on. Chernysheva's Panorama (2006) was inspired by VDNKh's cinema-in-the-round, which continues to screen the same handful of films made for its opening in 1959; the paintings in that series highlight the discoloration and fissures in the theater's curved screens and the idealized images of Soviet life flickering across them. The photographs in Alley of Cosmonauts (2008), taken near VDNKh, feature a silvery, soaring rocket monument and the adjacent walkway, where busts of rocket scientists and space explorers are wrapped in plastic as the alley undergoes renovations. The site honoring past heroes, closed to the public and dusted with snow, looks like an alien landscape. 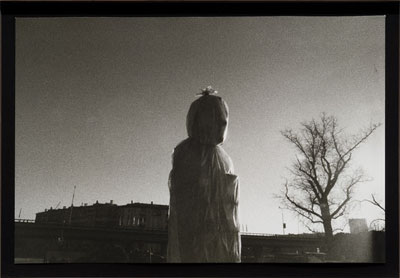 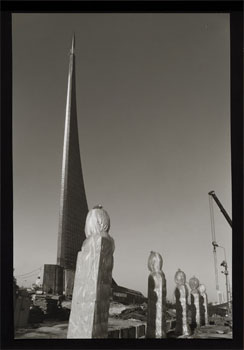 But Chernysheva's interest is not limited to ruins; recent developments are just as important to her. The lobby of a new Moscow high-rise is the setting for a photograph in the series Moscow Area (2008); it shows a fountain shaped like a nude girl pouring a jug of water over herself. The sculptor may have aspired to recreate the grace of Greek sculpture, but the result is kitschy, even vulgar. Chernysheva's video Brand Like a Friend (2007) is an anthology of corporate anthems, sung by uniformed employees. Many singers bungle the lyrics, and shy giggling betrays their discomfort at the imposition of camaraderie through music. The video March (2005) captures what Chernysheva calls the collision of the "American" and the "Soviet." Prepubescent boys in military uniforms should be standing at attention, but they steal glances at cheerleaders shimmying their bare midriffs a few meters away. They are framed by balloons emblazoned with corporate logos and blunt, quasi-Soviet slogans. The event, Chernysheva says, was planned to celebrate Moscow's winning bid to host the 2012 Olympics, and was held even after the city lost in the first round of voting. 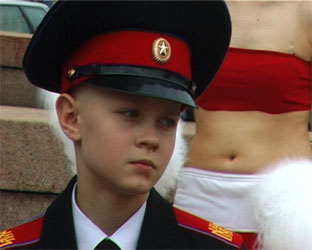 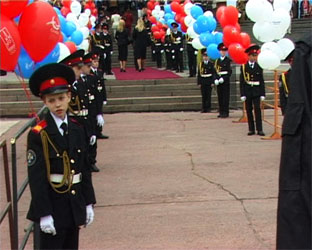 The Soviet relics and other exotic images of Russia in Chernysheva's works can distract a foreign viewer's eye, and tend to engender readings that cleave to a master narrative about a nation's struggle to cope with historical catastrophes. But the monuments of VDNKh or the jaunty patriotic tune in March are not keys to a political allegory; the associations with the idea of failed utopia that these details evoke simply add depth and resonance to Chernysheva's specific vignettes about the gap between the real and the ideal. Nor can her work be described as critical of "Wild East" capitalism, since her documentary works pass over the many scenes of Moscow life that would make for much more cutting critique. Instead, Chernysheva's art represents a soft, sympathetic humanism, both appreciative of the imagination's heights and grounded in its flawed manifestations.